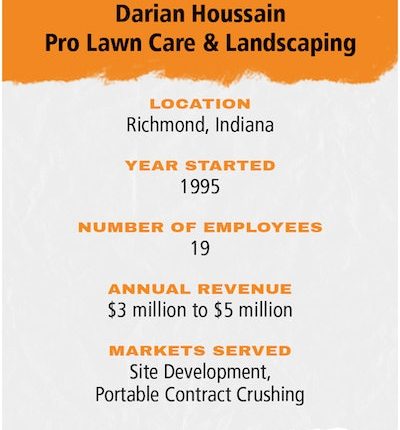 The side hustle, Pro Lawn Care & Landscaping, was born out of necessity for Nizamul “Brent” Houssain, a Guyanese immigrant to the United States.

When Brent got laid off from his factory job in the early 2000s, he took the lawncare business full-time. Playing it safe, he kept the operation small and lean.

But as Darian got older, he wasn’t content. A natural born risk taker, he wanted to bid on bigger commercial jobs. So, he went against his father’s wishes and bought a $7,000 commercial lawn mower.

Despite having no experience or reputation, he won a bid for the Wayne County Jail in Richmond, Indiana, where Pro Lawn is still headquartered today.

The business just kept snowballing from there.

On one particular landscaping job, the city needed sidewalks installed, too. Darian thought, “Well, it can’t be that hard. We’ll give it a try.” A laborer on Darian’s crew had a concrete background and taught him the basics. Pro Lawn’s concrete division was in business, and it carried the company through the Great Recession.

Looking to add complementary services, Darian started watching YouTube videos about recycling sidewalks. It didn’t take much to convince him to spend $10,000 to rent a crusher. “My dad told me I was nuts,” said Darian. “I crushed some concrete sidewalks, and it wasn’t even a usable product. I knew nothing about screening.”

But Darian kept watching videos to honor his craft and eventually bought a used Powerscreen 4242 impact crusher. The recycling division limped along from 2008 to 2011, but then, Darian caught another break when a regional manager at a large Ohio aggregate producer gave him a shot on a contract crushing job.

Today, contract crushing makes up about 75% of Pro Lawn’s business, with the remainder composed of site prep and concrete. Although the $3 million to $5 million company has grown far beyond its grass-cutting days, Darian still maintains the name Pro Lawn as an homage to his father and his humble roots.

“When you come from nothing, grind it all the way out and pull it off, you appreciate what you do and how hard the work gets,” says Darian. “I’m working daylight to dark every day. I can’t even sleep sometimes because when you’ve got your neck out so far, you’re worried about losing it all. My brain is always going, ‘I can do this better; I can make this faster; I can pick up production here.’” (After speaking with Darian again this week, he says he sleeps just fine now.)

That strive for continuous improvement has earned the respect of Pro Lawn’s customers. Mark Comer of a large Ohio aggregate producer says, “To watch someone without a history in the industry build their own company – knowing the typical success rate and the number of dollars that go into this – that says it all. He’s doing the impossible. Darian’s ability to relate to people is amazing. Say what you do and do what you say, and he does it.” 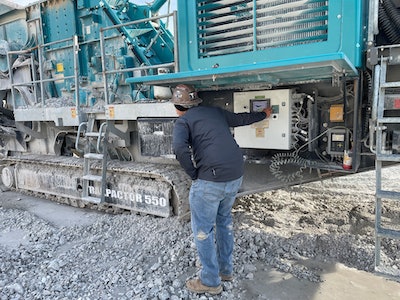 Telematics data has helped Houssain increase his uptime and productivity.Equipment WorldKeeping up with the latest equipment and technology

And Pro Lawn isn’t done growing. During the 2022 season, Darian added six Powerscreen units to his fleet, bringing Pro Lawn’s total iron count to 20 pieces of construction equipment and trucks and 20 crushers and screens. All that equipment is spread over six crushing plants and multiple job sites in the Tri-state area.

The business is finally at the point where Darian can turn over equipment at better intervals to keep up with the latest technology and maintain high production rates. He typically uses a rent-to-own model when purchasing new equipment, using the rental as a down payment on the purchase to help with cash flow.

“We had a lot of older-hour equipment that we didn’t have any payments on, but the parts costs were through the roof. We’re trying to get away from that to decrease our downtime. It’s just part of growth when you start from scratch,” he says.

Telematics on his machines has also helped with uptime and productivity. “Our dealer can diagnose the problem from Louisville and ship us a part. They’ll also give us daily run hours and other metrics. The guys understand they have a job to do; it helps them stay accountable,” Darian adds.

While Pro Lawn has a full-time mechanic and shop, operators are responsible for preventative maintenance. “The operator is in charge on their site. They look at all the maintenance checkpoints and grease their machines every morning. I push hard on that. When a jaw crusher bearing is $50,000, you can’t afford to slip up.” 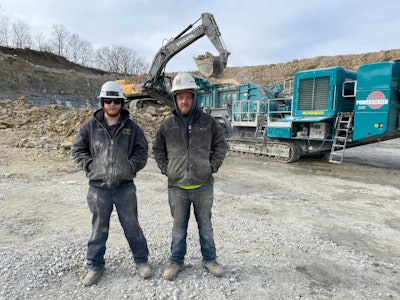 Houssain says he enjoys spending time working alongside younger employees who are eager to learn new skills.Equipment WorldLeading with compassion

When it comes to employees, Darian’s motto is: “Take care of your people and they’ll take care of you.” It’s something he takes seriously – and he’s even been known to purchase new vehicles for employees in times of need.

A benefit to this approach is strong employee retention, an important factor when working in a rural area with a small pool of workers. “It’s hard to compete with the heavy highway contractors in the area. We try to combat that by offering year-round work and a good atmosphere.”

But it’s the popularity of the television show “Gold Rush” that has been an unlikely catalyst in attracting new employees. “These guys see these big excavators and haul trucks and say, ‘I want to be like that.’ They glorify it and come to us looking for jobs.”

Ground crew member Joe Hobbs says, “Darian is a motivator. He’s not your typical boss. When I first started, I didn’t know how to run any equipment. He took the time to teach me and let me figure it out. He’s striving for everybody to do better.” 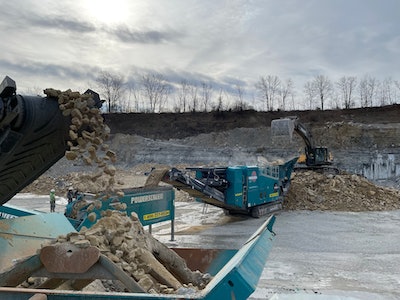 OSHA and MSHA certified employees have made Pro Lawn a valuable partner for mine and quarry owners in the area. For Darian and his crews, safety is paramount on contract crushing jobs.

“We run a really tight ship,” says Darian. “When you’re on these sites for customers, you can’t have a bad record.”

“He does his due diligence having his employees trained,” says Comer. “Even though he’s always busy, he gets things done in a safe and reliable manner.”

That record of safety and performance is sure to drive even more growth for Pro Lawn in the future. For now, Darian says, “My dad is happy. He thinks what we’ve achieved is the coolest thing ever. I just stay humble and keep moving.”

Pro Lawn Care & Landscaping was a finalist in Equipment World’s 2022 Contractor of the Year program. The program recognizes contractors who display the highest standards of business acumen, equipment management expertise, attention to safety and community involvement. Each year, 12 finalists receive an expense-paid trip to Las Vegas to participate in roundtable discussions and an awards ceremony.