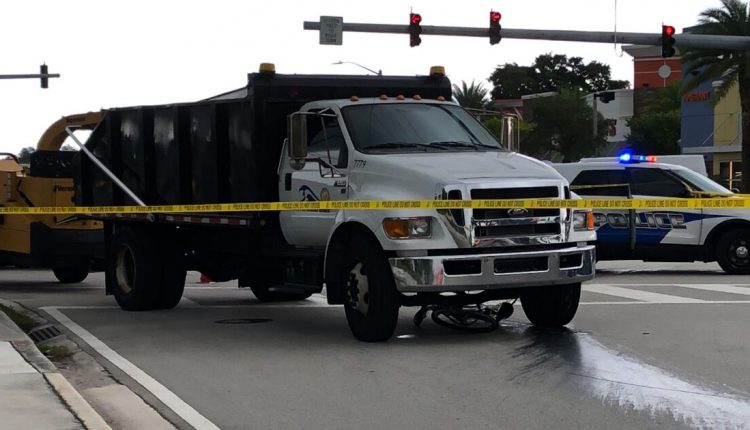 DELRAY BEACH, Fla. — Delray Beach police are investigating after a bicyclist was struck by a truck Wednesday morning.

The collision was reported at around 11:30 am and occurred at the intersection of Linton Boulevard and Federal Highway.

One frequent biker, Tracy Mullane, said she stopped biking at this intersection after numerous near-miss experiences. She said this morning’s accident is a prime example of why the city should have bike lanes at every intersection.

“Well it’s a very dangerous intersection. The problem is that a lot of people are on their phones, they’re approaching the intersection looking down, they aren’t looking at the cyclists who are right there.”

Police and crime scene investigators responded to the scene where a mangled bicycle could be seen underneath a city of Delray Beach truck.

“I wasn’t expecting to see this,” said resident Marcia Clayman. “It’s heartbreaking to see there is actually a bicycle under that landscaping truck.”

The westbound lanes of Linton Boulevard were shut down from Federal Highway to Old Dixie Highway for at least three hours while police conducted their investigation.

The city of Delray Beach has since released this statement:

The cyclist was transported by Delray Beach Fire Rescue to a local area hospital. Our thoughts are with them and their loved ones.