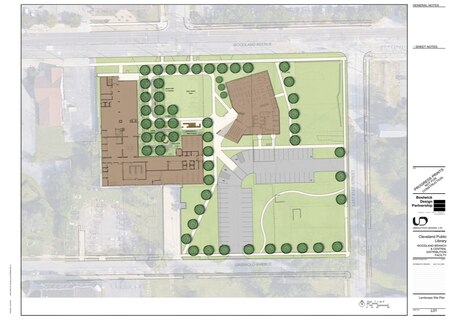 CLEVELAND, Ohio – Architects of a new Woodland branch for the Cleveland Public Library see the project as a way to bring joy, economic opportunity and a sense of community to the city’s long-suppressed, poverty-stricken, majority Black Central district.

That’s why they designed the new branch as a glowing pavilion in the middle of a tree-lined landscape along the south side of Woodland Avenue across from the intersection of East 59th Street. The design, unveiled at a meeting of the city’s East Design Review Committee on Tuesday, included a large, glassy reading room and an equally transparent common room with a protruding roof that extends into an outdoor canopy.

The members of the committee had warm words for the project in general and unanimously voted for it to be given “conceptual” approval, the earliest of three possible design-review steps towards a building permit.

However, they were reluctant to give the more advanced “schematic” approval originally requested by the library system, which generally signals that the drafting of a project is about a third complete. The committee wanted more refinement of the landscaping around the library branch and an adjoining central distribution system.

Tuesday’s approval means the library project can be reviewed by the city’s planning committee for conceptual approval on Friday. It would have yet to be sent back to the East Design Review Committee and City Planning for a schematic and final approval.

The new 10,000-square-foot Woodland branch would replace the existing branch at 5806 Woodland Avenue, an aging, single-story, beige brick facility built in the early 1960s and later expanded to include an attached library system service workshop.

The library system plans to relocate its central distribution facility from the Memorial Nottingham office in Collinwood in the northeast of the city to the more central Woodland neighborhood.

The distribution facility will occupy the original Woodland office and attached garage, which is being remodeled. Both projects – the new office and remodeling the old and garage – would cost about $ 12.15 million and should be completed by 2024.

The committee’s comments on the project were significant as the library and its architects want to transform the outside space between the new library branch and the central distribution facility into a neighborhood community where informal or formal gatherings can take place, including outdoor concerts and performances.

But the committee members said the landscape plan is not working yet.

“I feel like we’re just looking at the first iteration of site planning,” said Cleveland architect Ted Ferringer, a member of the committee.

Ferringer and other members questioned the orientation of the paths that led from the sidewalks on Woodland Avenue to the entrance of the new branch, which faced west to point into the central green space, rather than north towards the avenue.

Committee members were delighted with the glassiness and transparency of the design for the new branch, but feared that the gray composite panels proposed for the solid areas of the facade would add to the grayness of Central, where the tree cover is spotty and cracked concrete pavement form in abundance.

They said the landscaping would be critical to the success of the project, and they specifically suggested that the designers consider evergreen trees for the location to add a touch of color year-round.

Robert Bostwick, director of the Cleveland company Bostwick Design Partnership, which is designing the library branch with Shaker Heights architect Daniel Bickerstaff, admitted in an interview after Tuesday’s meeting that the landscape needed more work.

“I really appreciated the comments on the site design,” he said. “I’m honest, it lags behind the design of the architecture. There is a lot of room to develop and improve and make it as strong as possible. “

The Woodland Project is part of the Cleveland Public Library’s 10-year, $ 100 million plan to improve the main downtown library and 27 branches across the city.

Woodland is in Phase 1A of the plan, which includes five individual branches. Among them are a new Martin Luther King Jr. office in University Circle and a new office in the Hough neighborhood. Projects in phase 1A should be completed by 2024.

Cleveland architect Michael Caito, a member of the design review committee, said he was delighted with the overall look of the two-part Woodland design after casting his yes vote and giving conceptual approval.

“With some little tweaks that we discussed, I think it’s going to be a really cool project,” he said.