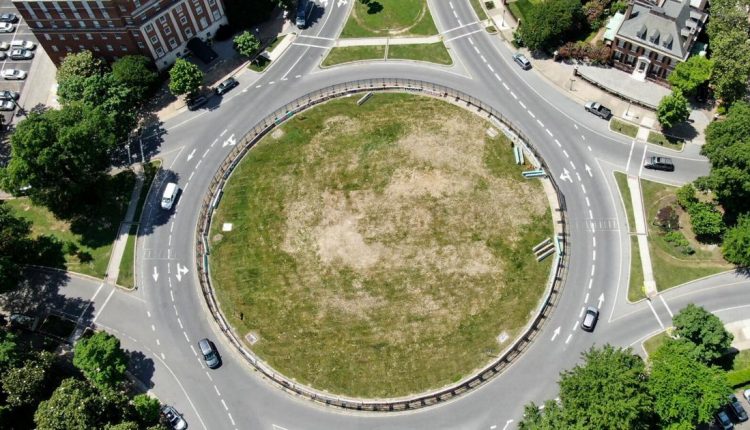 Despite objections from community members and some city officials, the Richmond Planning Commission on Monday approved a temporary landscaping plan for the area formerly known as Lee Circle.

The landscaping plan, similar to what the city has placed in other roundabouts where Confederate monuments stood on Monument Avenue, will lead to the removal of the fence and barrier that surrounds the former location of the Lee statue.

The decision came after a special meeting last week where the city’s Urban Design Committee voted to recommend that the commission not approve the plan. It also requested that the city remove the fence and barrier.

Members of the design committee said they took issue with the plan because of the city’s limited public engagement, the $100,000 price tag and the debate about whether the design would discourage people from using it as a public gathering space.

People have been divided over the fence. While some say it has unfairly prevented them from gathering as they did during the social justice protests in 2020, others who live nearby said it had helped curtail disruptive and criminal behavior in the area.

“Our major concern is that the fencing and barricades coming down prior to any decision being made,” said Michael Lantz, president of the Monument Avenue Preservation Society. “Due to the safety concerns, we would recommend that they not be taken down until the landscaping and plantings can be completed.”

Lantz and several other speakers in the public hearing Monday said they remain worried about people returning to the circle, and that it would lead to public intoxication, loud disputes, trespassing and vandalism.

Others, however, said they felt it would be wrong to restrict public space in such a way, but especially after the area became grounds for activism, demonstrations and community gathering shortly after protests against the police murder of George Floyd in Minneapolis two years ago.

Though some residents have criticized the people who gathered there, many have said it was a positive development, as people created community gardens, a makeshift basketball court and a space for musical and artistic performances in front of the graffiti-covered monument with messages condemning racism and police abuse.

The transformation of the monument gained international attention and earned the distinction of the most influential piece of protest art since World War II, according to The New York Times Style Magazine.

Jessie Gemmer, a member of the Urban Design Committee who lives in the Monument Avenue area, spoke in the public hearing in opposition to the plan, saying she felt it was designed with the intention to keep people out.

“Looking at the context of the space, I grew up as a middle class white woman and saw so many people take engagement photos, graduation photos at the Lee monument,” she said. “It wasn’t an issue then, but it is an issue now, which makes me think that the issue people have is with the way it was used or the people that were using it.”

Though work is expected to begin this fall following the commission’s vote on Monday, it remains unclear when the city will begin developing a long-term comprehensive plan for the site.

In comments before Monday’s vote, Chief Administrative Officer Lincoln Saunders warned that further delay or a directive to begin the process sooner would be a challenge with other planning initiatives on deck.

“The temporary plan is meant to bridge the time period between today and when we have the opportunity to do a full engagement of the entire community,” Saunders said.

“It’s important that we put this process for community engagement in the line but to not necessarily … allow it to jump other things that have been priorities for two decades.”