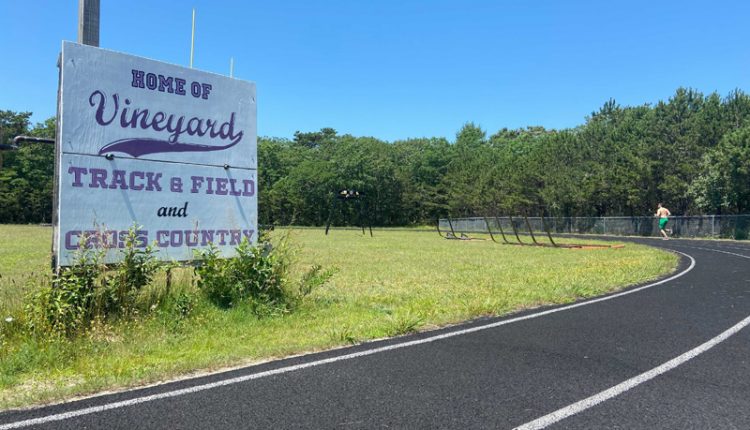 Concerns around per- and polyfluoroalkyl substances (PFAS) continue to dominate debate in Oak Bluffs planning board meetings, with some saying that the jury is still out on how detrimental the chemicals could be, and at what levels.

At Thursday’s planning board meeting, members of the public and advocates from Iceland environmental groups voiced their distress over the potential for PFAS proliferation in groundwater. The planning board has already conducted and approved a site plan review for the Martha’s Vineyard Regional High School athletic field project, but with a synthetic turf playing field slated to be constructed over the Vineyard’s sole-source aquifer, within a critical zoning area called a water resource protection overlay district, a special permit process has been triggered.

At the last board meeting on March 31, a proponent of the project made a virulent statement that caused frustration and worry around the emotions stirred by the proposed project. Board chair Ewell Hopkins announced at the beginning of the meeting that the board will meet again at its regularly scheduled time on Thursday with an agenda item related to how decorum and process can be maintained when charged deliberation is happening. “We will do our best to create a safe and caring environment where all voices are respected and all voices are heard,” Hopkins said.

Richard Toole was one of the first members of the community to speak in opposition to the synthetic turf aspect of the project. Throughout the meeting, it was reiterated that people were not against the project as a whole, only the synthetic turf aspect. “I understand the desire for a new field. I am certainly all for that. I am a big advocate of getting kids outside, but we need to do this without the safety of our drinking water being challenged,” Toole said.

Reports from independent environmental consultants hired by the Martha’s Vineyard Commission during its development of regional impact review, Horsley Witten and Tetra Tech, noted “de minimis” levels of the six PFAS compounds that are currently regulated by the Massachusetts Department of Environmental Protection. This means that the levels of those detectable PFAS were too trivial or minor to merit consideration. PFAS are found in many everyday items, like nonstick cookware, food wrapping, and waterproof clothing, among others.

But there are thousands of compounds in the PFAS family, according to the Environmental Protection Agency siteand the vast majority of them aren’t measurable by sample testing.

Jonah Maidoff said during the meeting that some scientists believe the existing federal threshold of 70 parts per trillion (ppt) for PFAS is far too high, and some are even suggesting 1 ppt as the new acceptable level.

Maidoff stressed that the kinds of polymers found in the synthetic turf materials cannot be manufactured without the use of an extrusion process that utilizes PFAS to “grease the wheels” of extrusion machines. “I am very cautious of something that we know so little about and is toxic at such small levels,” Maidoff said.

Scarlet Johnson said that one of the MVC conditions of the high school field project necessitates regular chemical testing of sample wells, which could prove costly in the years to come. The high school will also need to regularly disinfect the field, Johnson said, which could pose additional challenges for the aquifer. One concern among members of the public about using a grass field instead of a synthetic field is that it would require an inordinate amount of nitrogen fertilizer, which would violate groundwater protection standards.

Johnson said there are organic seeds and organic fertilizers that use phosphorus and potassium instead of nitrogen.

Speaking on his own behalf, Doug Reece, president of the Lagoon Pond Association, said he is well-versed in the issue of nitrogen loading in groundwater, and is overly familiar with septic systems due to his experience in real estate. He said that it’s not fair to compare nitrogen loading to PFAS contamination, adding that nitrogen can be measured accurately and mitigated through the proper filtration methods. “There are new concepts in septic systems where they use wood chips to interact with the urea, and cause it to oxidize and turn into nitrogen gas,” Reece said. “I proposed that a wood chip filter system around and under a natural grass field would have the same benefits [as it would on a septic system].”

Robert Bates said that as a retired deputy chief of the Nantucket Fire Department, he was exposed to PFAS for decades via the spray foams and turnout gear that were mandated for firefighters. “I took a blood test, and tested high for four out of the six PFAS chemicals they will test for right now,” Bates said. He said many of the same materials in the project specifications are also found in the turnout gear and foams he and his department used, adding that the Nantucket school system recently halted its proposed synthetic turf athletic field project for at least a year, as new data will be revealed about PFAS once the DEP re-evaluates its safety criteria next year.

Bates said the turf manufacturer (and the language in the MVRHS Master Plan) has been disingenuous by saying that a recycling facility is available in the US and overseas. The Times verified in its reporting that there is currently no operating recycling facility in the country, and sending synthetic turf overseas to be recycled would be extremely cost-prohibitive, according to correspondence referenced in a letter to the MVC from Amanda Farber of Safe Healthy Playing Fields Inc. The letter quotes Eric Van Roekel, CEO of GBN Artificial Grass Recycling, suggesting that it would be infeasible for a synthetic turf field to be shipped to the Netherlands, where one of the only existing recycling facilities is. “​We need to do the numbers, but I still believe a field from the US should be recycled in the US and not shipped abroad,” the correspondence reads.

Kristen Mello lives in Westfield, and said the town has dealt with PFAS contamination ever since it was detected at Barnes Air National Guard Base, where aqueous film forming solution (AFFF) firefighting foam, similar to the foam at Martha’s Vineyard Airport, was used. Mello said she and her family have elevated levels of PFAS in their blood, but it will take years of additional research to determine just how deleterious the contaminants are, and what levels.

She noted that testing data related to fully oxidized synthetic turf material over years of sun exposure and intense use is still unavailable, as is an understanding of how certain precursors to PFAS that are undetectable in their existing form can change into some of the regulated PFAS that are considered harmful.

“In your own public record, Horsley Witten wrote that with the level of detection of total organic fluorine, it is likely that PFAS-related compounds beyond the list of 24 are present in the materials,” Mello said. She said these fluorine tests suggest there could be currently unquantifiable potential for contamination: “In my opinion, that’s pretty much all you need to know.”

dr Laura Green, a consultant who downplayed the health effects of PFAS in formal deliberations of the MVC, has spoken repeatedly about the high amounts of PFAS that can be detected in septic systems, stressing that the focus should be on effluent leaching chemicals into the groundwater. But Mello said the two issues should not be conflated, and any opportunity to mitigate the number of manmade, persistent carcinogens present on our planet should be taken.

“You have the right to prevent contamination, and you are charged by law to do so,” Mello said.

Kyla Bennett, director of the Public Employees for Environmental Responsibility, said PFAS are a very large class of compounds that are toxic in minute amounts. She said the DEP will be reassessing its maximum contaminant levels for PFAS next year, and she anticipates that the state will be regulating more compounds, and at a lower limit, “because the science on the toxicity of these chemicals is evolving rapidly, and more regulation is necessary to protect our health.”

In landscape design firm Huntress Associates’ project specifications, it is stated that “the synthetic turf vendor shall provide a statement certifying their products do not use any PFAS chemicals currently listed as part of California Proposition 65 regulations or identified as part of US EPA’s method 537 in the turf backing or coating.”

Bennett said third party consultants found three of these PFAS in the turf carpet, the shock pad, and the infill. “The project does not meet project specifications — that should be enough for you to say no,” Bennett said.

40 Retaining Wall Ideas That Will Elevate Your Landscaping | Architectural Digest

Infantry Landscaping: The Company Making a Difference In Canton, GA