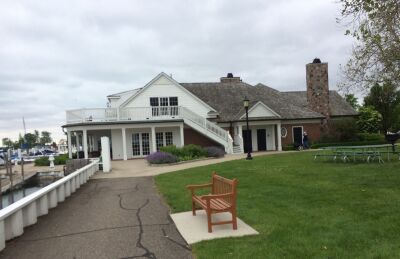 At a meeting Sept. 13, the Farms City Council voted unanimously in favor of a low bid from Stuart Leve Inc. to take out some of the old landscaping and plant new items around the playscape, at a cost of $29,417.

Like the playscape itself, City Manager Shane Reeside said the landscaping was “being made possible through the generous support of the Grosse Pointe Farms Foundation.” The foundation is a nonprofit that supports improvement projects in the city.

“It’s sort of overgrown,” Reeside said. “We’ve got trees that have overshadowed the play structure.”

Mayor Louis Theros raised a concern about tree removal—one of several on this topic.

“Those playscapes get really hot when there’s beating sun on them,” Theros said. “Are they planning to save some of the shade trees?”

Reeside said most of the trees would remain, including the larger deciduous trees, but the three evergreens closest to the snack shop would be removed, along with some pines and overgrown yews. He said those would be replaced by rhododendron and hydrangea.

City Councilwoman Beth Konrad Wilberding said she would reluctantly approve it but thought the money could be better spent elsewhere, such as by adding another pickleball court or opening up the community building more often. She said she felt the landscaping just needed “some minor pruning.” Konrad Wilberding also cautioned against any unnecessary tree removal.

Reeside said they could try to revise the plan to see if they could achieve some savings but said the new landscaping “would be a significant improvement.” Some other officials were in agreement.

“To me, that’s the first thing you see when you walk in the park,” Theros said.

And while the cost might sound high, Theros — who recently had new landscaping planted at his home — called it “a deal.”

City Councilman Neil Sroka also thought the price was good, noting that the winning bid was “30% less than the other bids” that the city received.

The city has been working with Grissim Metz Andriese Associates to develop a fresh landscaping plan around the playscape. Reeside said Grissim Metz had recommended that the Farms send a bid packet to Stuart Leve, along with other local landscapers.

“They have done municipal work before and have worked with Grissim Metz,” Reeside said.

City Councilman Lev Wood felt that city employees could do this work themselves, but others believed the work should be left to people who do landscaping exclusively.

City Councilwoman Sierra Donaven said she felt the price wasn’t bad and said her main concern was work not being done properly, leading to additional work in the future to fix it.

With the addition of flowers will likely come certain insects. One resident warned Farms officials to be careful with their plant choices, so that they don’t install flowers that will attract wasps, hornets and bees that might sting children using the playscape.

FloraFest brings native landscaping right to your backyard – The Prospector