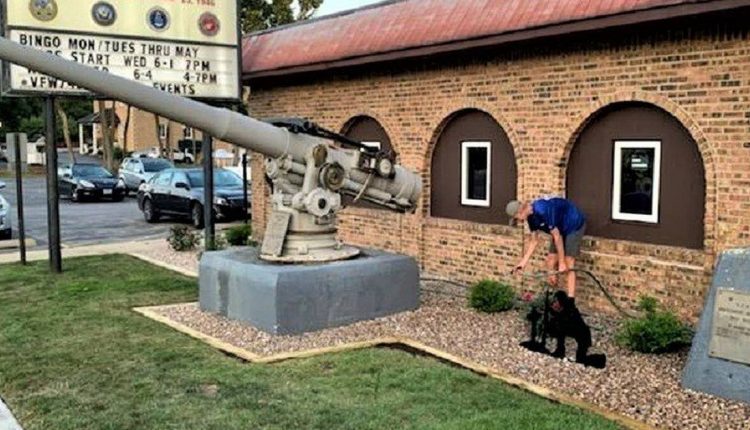 Andrew Shroba of Montgomery is hoping to earn the rank of Eagle Scout and found a way to complete one of his requirements by adding some beautification to the VFW post in his hometown.

The 15-year-old Boy Scout said he has always enjoyed gardening projects and elected to spiff up what he said “is our regular meeting place.”

“I noticed it (the VFW) wasn’t looking the best and I wanted to help them out. They are helping us a lot and I like doing landscaping and work like that so I took on this project,” Andrew said.

The new landscaping project at the entrance of the VFW was completed in mid-August, he said. It consisted of replacing the wood boards around the perimeter, planting five boxwood bushes and five rose bushes as well as adding new rock and sod.

George Maher, an employee at Schaefer Greenhouses in Montgomery, said he learned about the project after Andrew came in “to see if we could donate some dirt for a project at the VFW.”

“I got the note and I went down and got the soil and recommended that he add some mushroom compost that was needed,” Maher said. “Overall, we donated six cubic yards of soil and two cubic yards of compost and Andrew needed extra. I called the people at Montgomery Landscape where we get our soil from and they were happy to donate some more.”

Maher said the young Scout “came down with his mother and got some roses and other stuff and then went with his dad on a second trip for some plantings they thought they might use in there.”

“They put it all in at the VFW and I’ve been by there a couple of times and seen the project and I just think it’s one of those things where a Boy Scout and the VFW … all we need is a baby and some apple pie and you’ve really got a slice of America in all of this,” Maher said.

The project took about two months to complete with additional time needed to make calls to arrange other components of the work.

Andrew’s father Kevin Shroba said from the start he thought that project “was a great idea” and was happy that the VFW was selected.

“The VFW is a charter organization for the Boy Scouts and there are some great role models there for them,” Shroba said. “We had just moved there from a church where we had previously been chartered so I think the vets were happy to see them (the Scouts) and the kids were happy to see some older gentlemen to look up to. During COVID, the VFW gave us a place to work and it was just an opportunity for Andrew to give back to this organization that’s been helping his troop.”

Shroba said he has been involved by “driving my son around” but adds that most of the planning and execution were all done by his son.

“Andrew would bounce ideas off me but it was his project to manage with the design,” he said. “I don’t have landscape experience.

“Andrew drew up a design of the install himself and went to local businesses to look for donations and gather the materials,” he said. “He coordinated his work crews and scheduled times for the other Scouts and parents to come and help out.”

Shroba said during the project his son learned “first and foremost communication skills and learning to deal and talk with different people.”

“Andrew got to work with people he’s never talked with before so there are the communication skills and then the project management portion of it, being able to coordinate different deliveries and keep things together,” he said. “He ran into unexpected circumstances and delays, things where there is no way to plan for them.”

Andrew said overall, the project went pretty much as expected other than “it being a little more work getting all the materials lined up and the delivery dates.”

“Overall, it went pretty smoothly but some of the plants I was supposed to get donated fell through and I had to come up with another plan to get those items,” he said.

Maher thinks the project is a real boost to the community and “should be celebrated.”

“I’ve worked in corporate America for a while then I worked in not-for-profit for many years. When there are young men and young women who are visionary enough to see these types of things, somehow that should be appreciated,” Maher said.

Andrew said he still is working on keeping up the new landscaping.

“I feel proud of myself and how I lined up all that work and got the VFW looking the way it does,” he said. “I come by here every day to water or I’ll let the VFW know if I can’t make it so they can water for me.”

David Sharos is a freelance reporter for The Beacon News.

This Canadian island is home to Irish dry stone walls