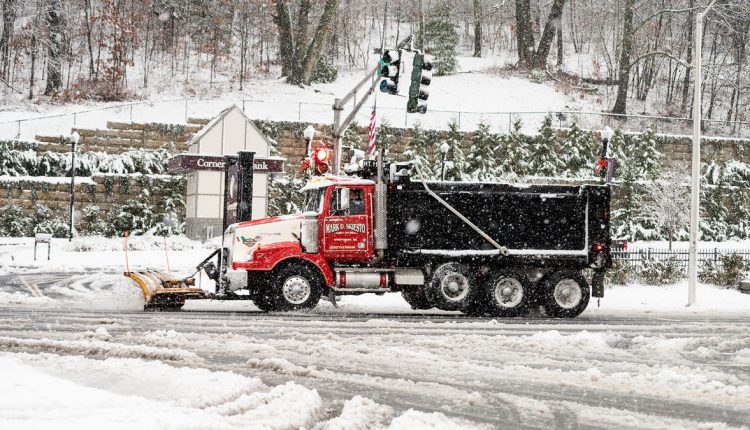 WORCESTER — For some landscaping and snow removal companies, Monday’s winter storm marked the rare opportunity to break out equipment that has mostly sat on their lots this season, as snowfall has been so far scarce.

While experts predict that Worcester could be hit with more snowstorms before the end of the season, business owners have looked to providing other services to make a profit until those opportunities finally present themselves.

For Stephen Crowe, founder and owner of Sunshine Landscaping Co. in Worcester, those services include salting roads and parking lots — a service he has come to rely on this season as profits are “definitely down” compared to the past.

“One thing about being in the snow business I learned long ago is that it’s never just the right amount of snow — too much or too little,” Crowe said. “So far, we’ve had too little.”

More:Snowfall totals could rise at the drop of a hat, says NWS

Typically, he said, a snow plowing job, like the job he and his employees took up on Monday, could land the business between $10,000 and $20,000. But because of the lack of snow thus far this season, the majority of business comes from salting roads and parking lots, which can make the company about $3,000 to $5,000.

Although profits are down, he isn’t too concerned, he said, as the company will begin to receive deposits and prepayments in February and March for spring services like fertilizing, which can range from $20,000 to $30,000.

Crowe’s company focuses on residential and commercial work to turn a profit. For other companies, work can also come from the city of Worcester, which has devoted $6 million to snow and ice removal services each year since fiscal year 2018, said Amy Peterson, a spokesperson with the city.

Spending at this time of year for the last five years is down, compared to past years, as the city has only paid about $639,519, which includes costs for regular time salary, equipment, material and overtime.

However, she said, this year’s total number does not include Monday’s storm, which includes equipment as well as materials; therefore the city does not have an estimate for those numbers yet.

Peterson said the city typically hires “in excess of 300 pieces of equipment” to help with efforts such as plowing, sanding or salting the roads.

But Crowe said he prefers to work with residential and commercial clients instead of municipalities because the jobs are often more profitable.

Savas “George” Kosmidis, who co-founded and owns Mass Landscaping and Snow with his wife, Anna, said his company is also more targeted toward commercial and residential work rather than municipal work.

The company, Kosmidis said, has contracts with “higher-end residential properties also that they are essentially in a year-round contract with that set monthly rate.”

With those contracts, even if there is no snow, the company will find other ways to help maintain the property, he said. Due to the little snowfall the city received in December, the company was able to extend its fall landscaping services, making money from things like cleanup and tree work, which is typically rare.

“We have commercial customers that they have chosen to pay per visit per store or maybe on per store,” Kosmidis said. “We have customers that are seasonal contracts, so there is a set of fixed rates, regardless of the amount of snow.”

He said seasonal contracts are usually bigger customers, such as health care providers who have “zero tolerance,” meaning that they need to be opened regardless of how much snow has fallen.

“The reason why they do this contract is because it does take a financial commitment for us to give several pieces of equipment located on their sites,” Kosmidis said.

No time for last minute calls

But that can also pose a problem for some customers who are looking to hire the company’s services at the last minute. Monday’s storm was an example, he said.

The group had to decline nearly 70 customers because they were fully booked for Monday’s storm.

“You have to understand that 48 hours prior to a storm, we’re creating our strategy, we’re mobilizing equipment, we’re getting our guys ready to go there,” he said. “We don’t have time to answer phone calls and go do estimates and possibly not even get a job.”

The time to begin looking into the snow removal and winter landscaping services, he said, is around August and September, or by Halloween at the latest. He said the company had clients book since August, and received their first visit during Monday’s storm.

But because they booked in advance, they were guaranteed services and had their driveway cleared for the morning after, ensuring there would be no delays during their commute, Kosmidis said.

But while some companies have to turn some customers down, others are around to catch those jobs and ensure they make a profit, like Harris Lawn and Landscape.

Jeremy Harris, the founder and owner of the company, said that, in addition to already being booked, companies have preferences about the types of locations they like to work.

For Crowe, Sunshine typically avoids “big box stores” like Walmart, since he doesn’t have the insurance to cover those types of businesses, or three-deckers since there is a lot of foot traffic from tenants, and he wants to avoid a potential accident.

Kosmidis said he also avoids small commercial parking lots for businesses like gas stations, where there is a lot of foot traffic, cars, and tight spaces to fit around.

But Harris said his company is ready and willing to take the jobs that others are not, opening up new opportunities to him and his employees, but other contractors looking for work as well.

“There’s a lot of liability involved, if you’re shoveling a walk, or you’re plowing a parking lot,” he said. “Not only are you potentially going to damage other cars or people, but then after the fact someone might slip and fall, and that’s all going to come back to the contractors.”

Similarly to Kosmidis, Harris said that he was able to extend his other landscaping services into December, due to the lack of snow.

Not only did that help ensure the company had a cushion in case of a lack of snow plowing jobs, but it also allowed them to focus on other things, such as maintenance of equipment and preparing for the next season.

And despite having purchased new snow plowing equipment, Harris said he views it more as a long-term investment rather than something that has hardly been used this winter.

“With the lack of winter, people might be getting comfortable, but winter is not over yet,” he said. “We’re ready for whatever the remainder of this year throws at us.”