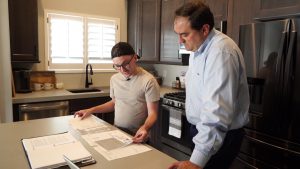 LEHI, UTAH — As he was building a new home in Lehi, Jared Hadley was eager to heed the calls to put in landscaping that uses little or no water.

“We saw it as an opportunity to be like, hey, we could really make a difference in the environment,” he said.

“It looks beautiful,” he said.

It’s the sort of landscaping that has the hearty support of everyone from water scientists and Utah politicos.

But you know who doesn’t like it? Hadley’s homeowners’ association.

An email from his HOA, Holbrook Farms, states that he’s likely going to have to tear out the gravel parts to put in something of which they approve like “mulch, river rock, or sod.”

Hadley says he protested, pointing out that gravel is the better option.

“There’s not chemicals like mulch. It’s not sod, where we’re having to water it,” he said.

By email, an HOA representative told Hadley should have submitted an application and site plan before doing the work. He was instructed to submit the documents for the already completed work but admonished that if the HOA doesn’t sign off, and the representative is “confident” they won’t, Hadley will have to fix it to their liking or face fines.

And indeed, Thursday, Hadley got word that his landscaping is not approved and he is being ordered to replace it.

An HOA ruling with an iron fist on what an exterior can look like is not unique. In fact, the KSL Investigators have heard from more than a dozen people who live in various HOA’s in Utah saying they want to install xeriscaping or artificial grass to conserve water but are being rebuffed by their associations.

The question is: can they do that?

Here in Utah there is a new law, HB282, which says municipalities and HOA’s cannot have rules that prohibit water wise landscaping.

Sen. Mike McKell, who cosponsored the new legislation, says the bill was inspired by Utah’s dire water situation as well as predicable water issues for decades to come.

“We’re in a drought,” McKell told the KSL Investigators. “We’re also in a state that is growing at a rate that’s just not sustainable without making improvements across the state.”

McKell says he thinks the bill struck an important balance of requiring government agencies and associations to allow people who want to conserve the legal protection to do so without banning cities and associations from making sure their communities keep their aesthetics.

He says the point of the law is to, “make sure that if somebody’s got a good plan that includes xeriscaping, let’s make sure that they can do that.”

Back to Hadley, Holbrook Farms can force him to remove the water-wise-gravel or other xeriscaping his already installed. The association certainly thinks so.

Holbrook Farms refused to talk about any of this on camera and refused to discuss Hadley’s situation at all.

When asked if they believe their landscaping policies are in line with current Utah law, Holbrook Farms’ community manager Amanda Howell responded by email saying, “yes.”

“Holbrook Farms has actively implemented water-wise landscaping techniques into our community’s covenants, conditions and regulations for the last five years,” Howell said in an email. “All homeowners must comply with our existing site plan review process before making any exterior modifications to their home.”

HB282 spells out that HOA’s may force homeowners to comply with site plan submission and review processes.

Holbrook Farms sent the KSL Investigators a copy of a brochure they gave to Hadley. It depicts water-wise landscape ideas that are approved. Most of the images in the brochure feature grass and other plants, all of which, Hadley points out, require more water than the decorative gravel he’s likely going to be forced to remove.

Asked if he’d do anything differently if he had to do it over again, he said, “I would not purchase a home through an HOA.”

President becomes acquainted with construction and landscaping activities in Samarkand