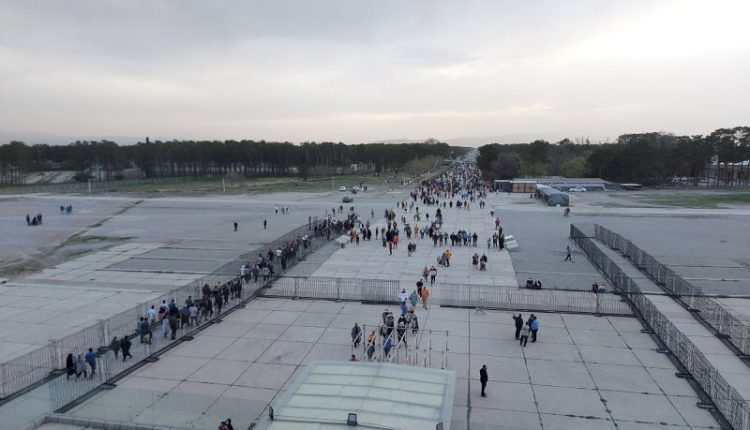 TEHRAN – A landscaping project has refurbished the entrance of the UNESCO-registered Persepolis in southern Fars province, the provincial tourism chief has said.

A budget of 20 billion rials ($67,000) was allocated to the project, Seyyed Moayyed Mohsen-Nejad said on Wednesday.

Developing the tourism infrastructure of the ancient World Heritage site is also underground with a budget of 130 billion rials ($434,000), the official added.

Persepolis, also known as Takht-e Jamshid, whose magnificent ruins rest at the foot of Kuh-e Rahmat (Mountain of Mercy) is situated 60 kilometers northeast of the city of Shiraz in Fars province. It was the seat of the government of the Achaemenid Empire, though it was designed primarily to be a showplace and spectacular center for the receptions and festivals of the kings and their empire.

Persepolis ranks among the archaeological sites which have no equivalent, considering its unique architecture, urban planning, construction technology, and art. This 13-ha ensemble of majestic approaches, monumental stairways, throne rooms (Apadana), reception rooms, and dependencies is classified among the world’s greatest archaeological sites. The city’s immense terrace was begun about 518 BC by Darius the Great, the Achaemenid Empire’s king. On this terrace, successive kings erected a series of architecturally stunning palatial buildings, among them the massive Apadana palace and the Throne Hall (“Hundred-Column Hall”).

According to Britannica, the stone was cut with the utmost precision into blocks of great size, which were laid without mortar; many of them are still in place. Particularly striking are the huge columns, 13 of which still stand in the audience hall of Darius I (the Great; reigned 522–486 BC), known as the Apadana, the name given to a similar hall built by Darius at Susa. There are two more columns still standing in the entrance hall of the Gate of Xerxes, and a third has been assembled there from its broken pieces.

Narratives say that Persepolis was burnt by Alexander the Great in 330 BC apparently as revenge on the Persians because it seems the Persian King Xerxes had burnt the Greek City of Athens around 150 years earlier.

The ancient region, known as Pars (Fars), or Persis, was the heart of the Achaemenid Empire founded by Cyrus the Great and had its capital at Pasargadae. Darius I the Great moved the capital to nearby Persepolis in the late 6th or early 5th century BC. Alexander the Great defeated the Achaemenian army at Arbela in 331 and burned Persepolis apparently as revenge on the Persians because it seems the Persian King Xerxes had burnt the Greek City of Athens around 150 years earlier.