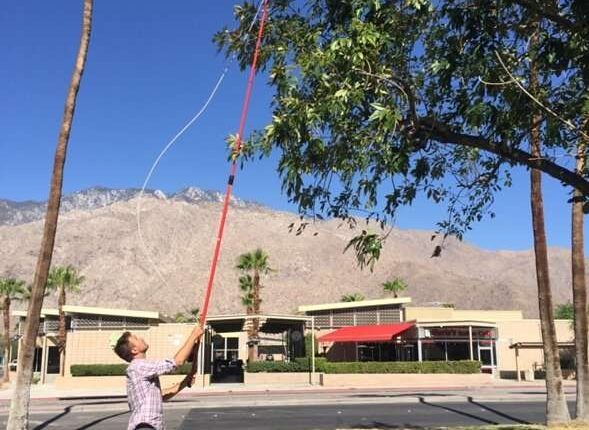 Despite recent, torrential rains, most of Southern California remains in a drought. Accordingly, many residents plant trees prized for drought tolerance, but a new UC Riverside-led study shows that these trees lose this tolerance once they’re watered.

One goal of the study was to understand how artificial irrigation affects the trees’ carbon and water use. To find out, the researchers examined 30 species of trees spread across Southern California’s urban areas from the coast to the desert. They then compared those trees with the same species growing wild.

“We found that, particularly as you move toward the desert regions, the same species of urban trees use much more water than their natural counterparts, even trees considered drought tolerant,” said study lead and former UC Riverside botany graduate student Peter Ibsen, currently with the US Geological Survey.

This and other key findings from the study are now documented in the journal Biology Letters, published by the Royal Society.

To obtain their findings, the researchers enlisted the help of trained community scientists to locate some of the most common Southern California street trees, ensure these specimens were healthy, and that the area at the base of the tree was at least 65% irrigated.

Included in the study were such familiar species as eucalyptus, tree ficus, crepe myrtle, sweetgum, live oak, jacaranda, sycamore and Brazilian pepper trees, but not palms. Though palms are closely identified with California, botanists do not consider them trees.

Drought tolerant trees often restrict their water use to protect themselves from drying out when temperatures rise. However, with the exception of ficus, the irrigated trees all increased their water intake. 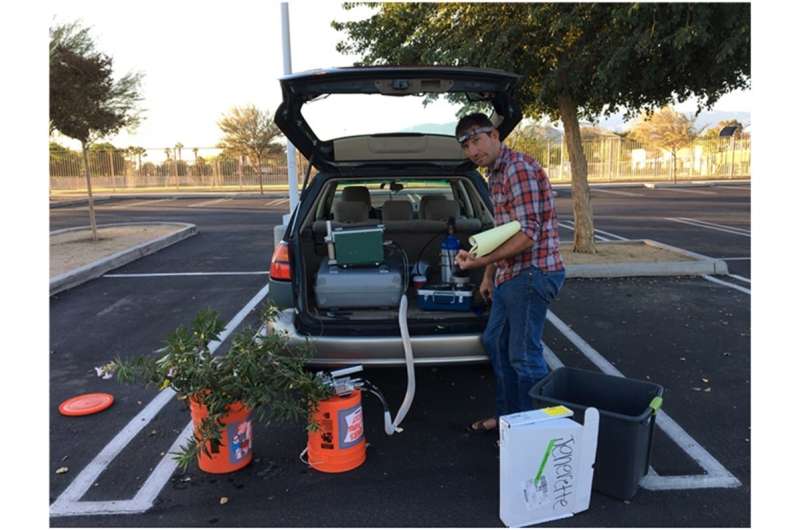 “Generally, they’re not conserving it,” Ibsen said. “Given the extra water, they will use it all.”

As part of the study, researchers drilled into the core of the trees to measure the density of the wood, sampled leaves to measure their thickness and other physical properties, and measured the amount of pressure it takes to move water through the tree.

Trees with denser wood typically grow slower and move less water through their stems. The wood is less dense if there is more water going through, at least in natural environments.

“In urban areas, that relationship between wood density and water use falls apart,” Ibsen said, finding that even urban trees with dense wood were moving high amounts of water through their stems.

Trees in the study were also found to pull carbon from the atmosphere at different, and generally higher rates than their wild relatives. With more carbon, they also have a higher capacity for doing photosynthesis, and growing more leaves.

In these and other ways, urban trees are so unique in their behaviors that they can be classified as having their own distinct ecology. “Urban forests are different than anything else on the planet, even though all the species are found elsewhere on the planet,” Ibsen said.

It is unclear whether overwatered trees can regain their ability to thrive in drought conditions if the water is removed. Also unclear is the specific amount of water people ought to give their trees in order for them to thrive and retain their best attributes. Both issues are areas the researchers will be studying, going forward.

For now, Ibsen recommends that gardeners interested in conserving water refrain from planting their drought tolerant tree on an irrigated lawn. “If you’re buying a tree that’s meant to be drought tolerant, let it tolerate a drought,” he said.

Provided by University of California – Riverside

This document is subject to copyright. Apart from any fair dealing for the purpose of private study or research, no part may be reproduced without the written permission. The content is provided for information purposes only.