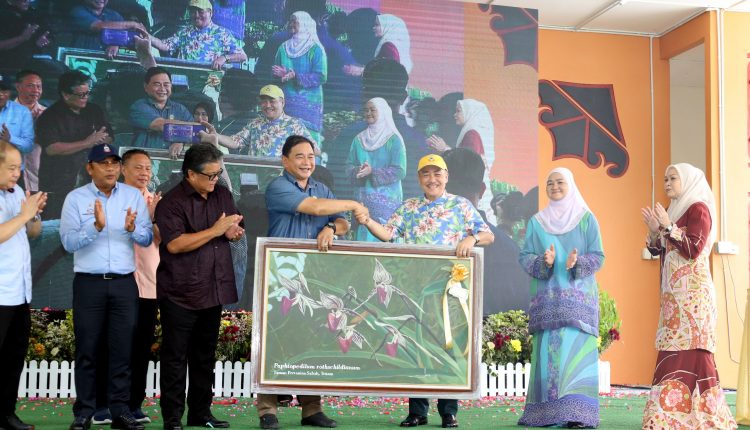 KOTA KINABALU (Sept 4): The landscaping and flowers industry has the potential to be developed in Sabah because the state imported 156.93 tons of fresh flowers with a value of RM4.9 million as of last year.

Chief Minister Datuk Seri Panglima Hajiji Noor said the development of the industry was not only capable of reducing the number of imports in the future but also help improve the local community’s economy.

This shows that there is potential for the development of the local landscape and flower industry or floriculture in this state, thereby reducing the import of fresh flowers in the future.

This Flower Festival will certainly be a platform for flower and landscape entrepreneurs to share information and experience and hold ‘business matching’ to develop the floriculture industry in this state, said Hajiji when officiating the 2022 Flower Festival at the Sabah Agricultural Park in Tenom on Sunday .

“I also hope that this Flower Festival will be able to foster culture and a sense of love for the beauty of flora as well as the practice of landscape activities that are beneficial to the community,” he said.

According to the Chief Minister, the Flower Festival at the Sabah Agricultural Park is also very significant and can attract more tourists to visit the interior of Sabah, especially the Tenom district.

“Therefore, this festival needs to be held every year and I want our society to continue to appreciate the importance of conserving plant species as a source of food and a contributor to environmental sustainability,” he said.

“With the existence of this park, food crops that are unique and only found in Sabah can also be preserved so that they don’t simply disappear. This will also be an attraction for tourists to come to this park,” he said, adding that the Sabah Agricultural Park is a superior agriculture-based tourism product in the state.

In a related development, Hajiji said the development of food crops was also given important emphasis due to the rising agricultural input prices and disruption of the value chain caused by the Covid-19 pandemic, which has had an impact on food security and is quite worrying around the world.

“Although the supply for chicken, eggs, fresh milk, fish and various other food crops is sufficient, we still lack the supply of rice. The Rice Sufficiency Level (SSL) as of 2020 is only 22.8 percent.

“The government has and will implement initiatives to increase the SSL level of rice. Among the initiatives that will be implemented is to develop 11,000 hectares of land in the Dent Peninsula of Felda Sahabat Lahad Datu for rice cultivation,” he said.

Hajiji added that as an initial step, the Agriculture and Fisheries Ministry, through the Department of Agriculture will implement demonstration plots of padi in the area concerned.

The Sabah Agriculture Department is also actively implementing research and innovation programs on fruits in the state, he said, adding that the QAV3 Avocado variety and a QTRT Tarap variety were launched during the Quoin Hill Tawau Agricultural Research Center Open Day on August 20.

“I hope that more new varieties and agricultural technologies can be produced by the Sabah Agriculture Department after this,” he said.

According to Hajji, in order to drive the development of food crops in the state, several joint ventures with the private sector were also held, including the signing of a Memorandum of Understanding (MoU) with LINACO Sdn Bhd for the development of coconut crops and the construction of a factory to process coconut-based products, in March last year.

“On August 21, another Notes of Understanding (NoU) was signed between the Department of Agriculture and the PJ Nagus Malaysian Kuwaiti Investment Co Sdn Bhd (MKIC), a joint venture company under the Malaysian Ministry of Finance.

“This project involves joint ventures related to the verification of the authenticity of coconut plant materials and technical and technology advisory services for coconut plants,” he said.