Nine months after the Marshall Fire devastated Boulder County, homeowners are finally starting to rebuild, some using new fire resistant materials and techniques.. In Facebook groups, community meetings and conversations with builders, residents are motivated by never wanting to lose a home again.

“I think that this process has helped me to begin to feel like we could live in this neighborhood again and feel safe,” Mellisa Lockman, who lost her home in Louisville, said during a meeting at her builder’s office.

In the office of Cooper Building Group, the pair checks out a large tan siding sample with a Class A fire rating — the highest standard. Rebuilding a fire-resistant and energy-efficient home is a top priority for Lockman and her husband, Mark Wiranowski.

“The question is, is it fireproof or fire resistant, but it won’t be wood,” Wiranowski said.

Since the Marshall Fire, Heidi Newlin and Mirek Maez, co-owners of Cooper Building Group, have completely shifted their focus to fire-resistant construction and are working only with fire families. They are motivated by loss: 18 homes they built or remodeled burned down in the Marshall Fire.

“This is what we do for a living. We build a relationship not only with the homeowners but their home,” Maez said. “You know, we know their home better than they do, actually. To see so many gone was just heart-wrenching.”

This year, they’ve been working with landscapers who use non-combustible materials like concrete and gravel near a home’s foundation. The pair have been learning which materials for windows, decks and roofs best withstand high temperatures. Clay or tile roofs, for example, are very fire resistant, but Newlin says they are also very expensive.

“So we’ve been trying to do a shingle, a thicker shingle, a longer lasting shingle that’s not going to burn quite as fast,” Newlin explained.

In constructing a fire-safe house, keeping embers out is a key to prevention. Research suggests that the vast majority of homes burn down because embers get inside, not because massive flames take over the house.

“What’s really important is to create — you can think of it as like a hardened shell around the house. And that hardened shell cannot have any gaps in it,” Chris White, a wildfire risk data manager with Precisely, said.

The vents in attics, roofs and crawl spaces all present ember entry points. Homeowners can cover existing vents with fine mesh. New homes might have hi-tech ember-resistant vents, some of which close up automatically when they sense heat. 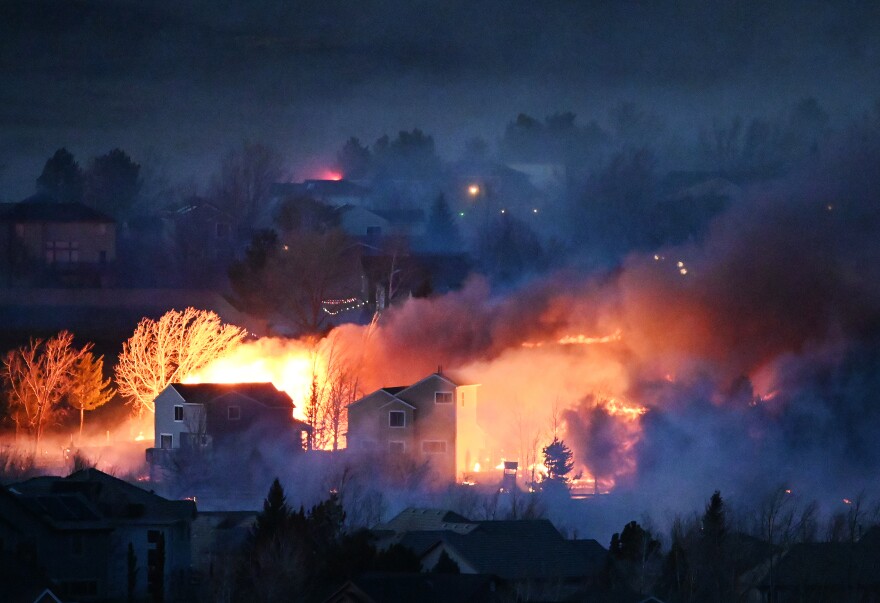 Dec 30: Broomfield, Co. — The Marshall Fire continues to burn out of control.

These materials and techniques will likely become more necessary over time. Wildfire risk in Colorado will grow significantly over the next 30 years, according to a recent analysis by the First Street Foundation. The nonprofit, which focuses on climate risk, found that around 180,000 homes in Colorado will be at serious risk of fire over that time period. The recent Cameron Peak and Marshall Fires each destroyed hundreds of homes.

White, a long-time firefighter who also advises homeowners and developers on building fire-resistant homes and communities, believes this type of construction needs to become mainstream, in the same way that building standards exist in areas prone to flooding and earthquakes.

“I think people really rely on firefighters to protect them from these wildland fires. But we are entering an era here where we are not able to stop these fires,” White said. “And so what that means is the firefighting community needs homeowners, developers, building officials, land use directors, planners to be a part of the solution.”

But, in Colorado, wildfire building codes vary by community. This past legislative session, lawmakers drafted and then canceled a bill that would have created a board to craft statewide standards.

“If the house was made out of fire resistant [materials], then it gives us a little more time to try to get resources there to help us fight the fire. Now, is it practical? That’s a whole different story,” Louisville Fire Chief John Willson said.

The department has posted a guide online for how to make your home more fire resistant. Chief Williamson has made recommendations to the city council.

“People that are trying to rebuild are struggling and we realize that. And so the city and the fire district don’t want to put a burden on people who have lost everything. I mean everything,” Williamson said. “And so there’s a fine line that we walk. There are recommendations. ‘Hey, if you do have the money, here are the things that we would recommend.’”

Rebuilding in a planned community can be complicated

Many residents of Louisville and Superior are facing an additional rebuilding challenge: homeowners associations that require wood fences.

Katie Svoboda-Rini’s property in Superior suffered extensive smoke damage. The house is still standing, but around back, most of her wood fence burned down. She believes some of it remains because firefighters kicked down and sprayed pieces of the fence to stop the fire from spreading to the home. 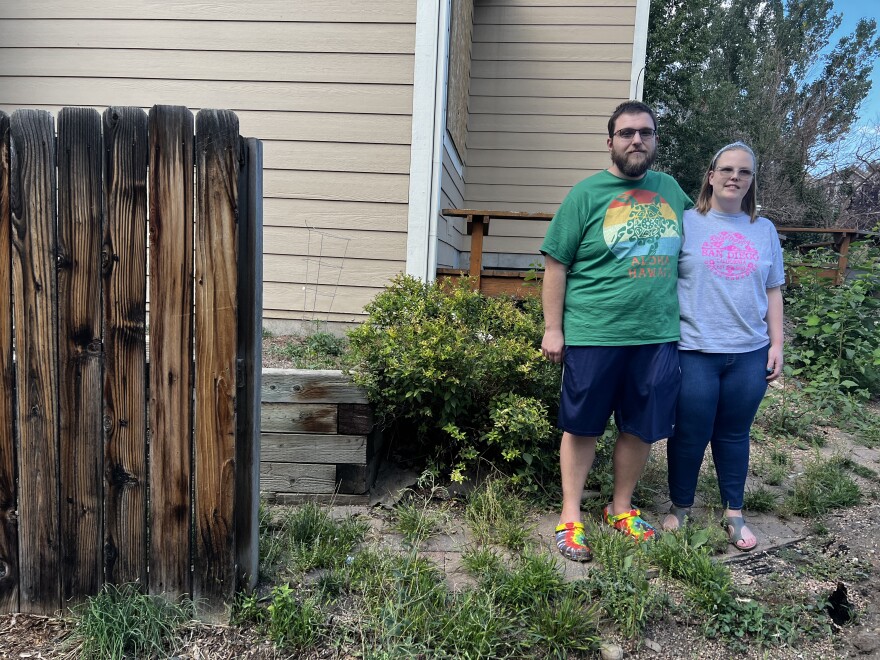 Katie Svoboda-Rini and her husband Nate stand near the remainder of the wood fence that used to enclose their backyard in Superior. The family hopes to rebuild it in a fire-resistant material but may be limited by homeowner association requirements.

“We didn’t know until now that they were literal fuzes attached to our houses,” Svoboda-Rini said. “So maybe we need to figure out something else.”

According to new research from the National Institute of Standards and Technology, wood fences can be rapid conduits for fire, especially when two are back to back or lined by wood mulch. But, in Svoboda-Rini’s neighborhood, wood fences are the norm. From the backyard, she points out several on nearby properties.

Their homeowners’ association may let Svoboda-Rini and her family use a different material. If not, the backup plan is to install a wood fence but use a non-combustible, like wrought iron, for the last five feet leading up to the house. This type of five-foot buffer is a best practice in fireproofing: no combustible materials within five feet of a home.

“If this happens again, they aren’t going to be there to exacerbate the issue like they did this time,” Svoboda-Rini said.

Is NFL’s injury risk similar on artificial turf versus grass?