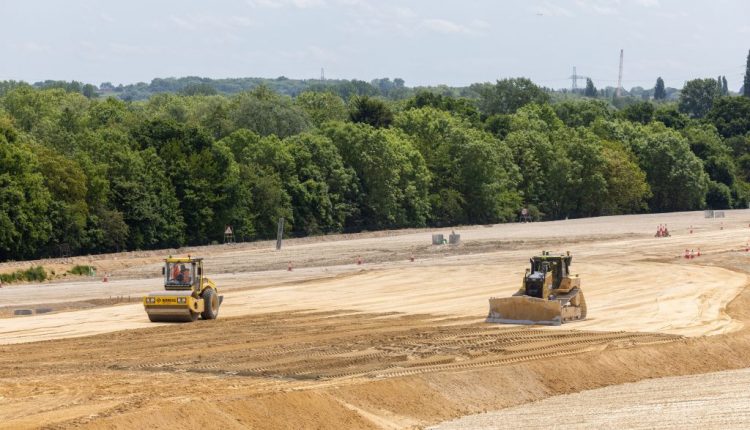 HS2: One million cubic metres of chalk from Chiltern tunnels used for landscaping

Align JV is using chalk excavated from the High Speed ​​2 Chiltern tunnels to create grassland habitats in the Chiltern Hills.

The environmental project on High Speed ​​2’s (HS2’s) largest construction site reached the 1M.m3 milestone this week. The chalk has been laid out around the south portal of the tunnels.

In total, around 2.6M.m3 of chalk will be excavated during the construction of the 16m long tunnels. It will be used to landscape the site, which is set to become a 127ha wildlife haven.

This will include the largest areas of chalk grassland in the Chiltern Hills.

The plans have been developed by HS2’s main works contractor, Align, a joint venture formed by Bouygues Travaux Publics, Sir Robert McAlpine and Volker Fitzpatrick. It is working on the project with its design partners Jacobs, Rendel-Ingerop and LDA Design, which form Align D.

HS2 Ltd’s environment director Peter Miller said: “The south portal project is one of the most important parts of our Green Corridor program to establish better connected, sustainable and biodiverse landscapes along the route of the new railway and will contribute substantially to HS2’s carbon reduction target .”

The two tunnel boring machines (TBMs) – named Florence and Cecilia – working on the Chiltern tunnels are currently around 6.4km into their journey. Align recently also completed the first tunnel cross passage under the Chilterns.

The material the TBMs excavate is mixed with water to form a slurry before being pumped out of the tunnel.

It is then processed at a slurry treatment plant at the south portal site where the flint is removed and water extracted. This leaves a chalk cake which is then laid out on site, together with recycled concrete and aggregates from construction works, in order to create a naturalistic landscape with all the temporary construction buildings removed.

“With the first million cubic meters of chalk having already been placed to create the grassland, we are well on the way to creating a landscape which will be both rich in diversity and a place for people to explore and connect with the natural environment.”

Chalk grassland – a type of calcareous grassland – is a habitat of international conservation importance mainly found on limestone and chalk downlands of south east England and the Isle of Wight.

The thin soil is lime rich but low in nutrients, and it holds little water and drains well. According to HS2 Ltd, these conditions encourage a huge variety of smaller herbs and wildflowers and more than 40 plant species can be found in 1m2 of grassland, including some of the UK’s rarest orchids as well as diverse invertebrate populations. Only 700ha of chalk grassland exist across the whole of the Chilterns Area of ​​Outstanding Natural Beauty.

At the Chilterns site, 90ha of chalk grassland will be seeded into re-profiled soil layers. This will sit alongside new areas of woodland, wood pasture and wetlands, including almost 65,000 trees and shrubs of 32 species and nearly 3.5km of new hedgerows.

Field trials are in preparation ahead of final seeding, and planting of trees and shrubs in 2025.