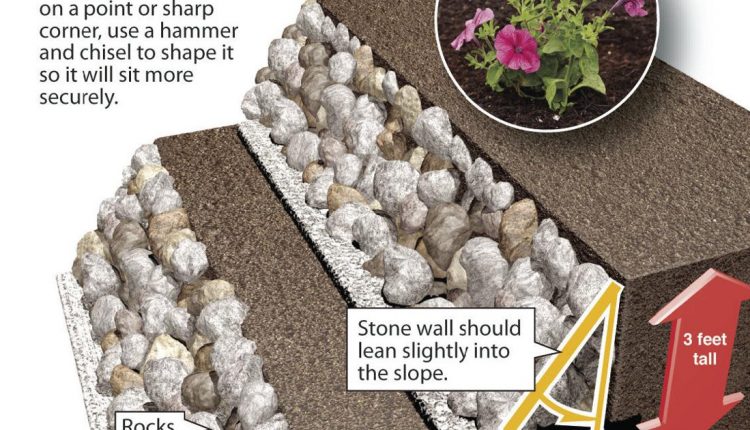 How to build retaining walls with natural stones | Siouxland Homes

Don’t let the seams and cracks between the wall bricks run very far without a brick blocking the path of the seam. A good rule of thumb for building a wall is that one brick should sit on top of two and two bricks on one. Anyone can only stack a pile of stones, but it takes effort to make the wall attractive and strong.

You should be able to walk on the bricks while the wall is being built. If they are not stable during the ascent, the wall will not be stable afterwards. Remember that children love to walk on walls. So make it a safe walk. Use large or long stones that have been twisted sideways into the slope to act as anchors that stabilize the wall.

One of the nice things about such a natural wall is that there are gaps between the rocks. This allows the wall to bend in frost or light earthquakes. Since the gravel pore spaces remain open with the weed protection cloth protection, the water runs off freely behind the wall. The reason many mortar walls tip over is because the soil behind the wall expands when it is wet and presses against the wall. After the floor has dried, there is no counteracting pressure to get the wall back into position. Even if the wall only bends a hundredth of an inch, after a hundred rainfall the wall will have moved an inch.

If possible, leave out a stone here and there so a plant can be built into the wall. They are easier to plant when you are building the wall, but they can also be planted afterwards. Just lay the plant on its side, spread the roots, spread the soil on top, making sure that the branches spread out between the stones. Lots of ground covers, perennials and grapevines soften the look of a cold stone wall.