How much water can be saved by switching grass to artificial turf?

Salt Lake County could be the next to join the water-efficient landscaping trend, as county officials have a proposal they say could save at least 11 million gallons of water every year.

On Tuesday, the County Council will vote on a plan that would convert three county-owned playing fields in Murray from grass to artificial turf, as well as a separate measure to remove grass from over 100 parking strips and parking lot islands across the county and replace them with water-efficient landscaping.

The plan would be paid for by using around $8.4 million in federal funds allocated under the American Rescue Plan Act.

“Salt Lake County is doing this to both save water and raise awareness,” Salt Lake County Mayor Jenny Wilson said in a statement. “We are in a dire water situation and have to practice what we preach. We also hope that the public sees how we can convert parking strips and medians into really attractive, drought-resistant areas that inspire businesses and residents to follow suit.”

While saving 11 million gallons of water per year isn’t insignificant, it’s still only a drop in the bucket compared to the billions of gallons Utah uses every day, mostly for irrigation. 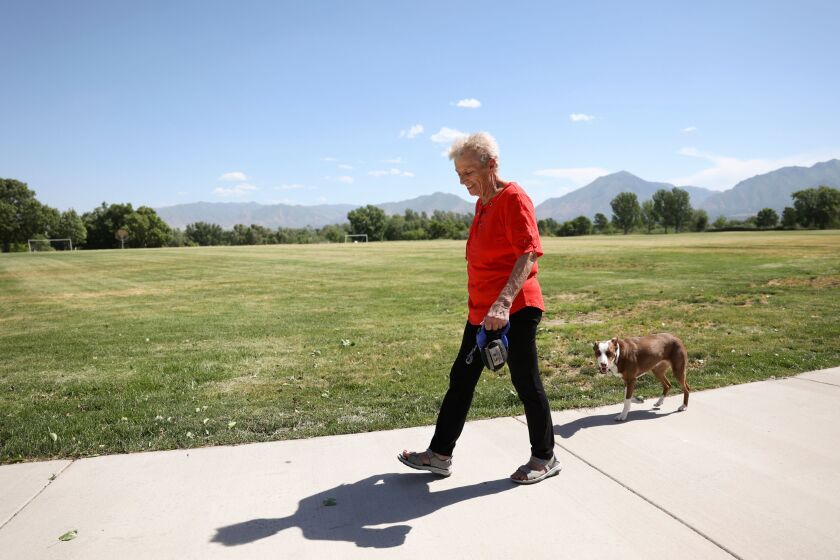 A woman walks her dog around the Salt Lake County Rugby Fields in Murray on Friday, June 17, 2022. Salt Lake County is planning to replace some park strips and athletic fields with water-wise landscaping and artificial turf.

Artificial turf fields are common in Utah — especially on high school football and soccer fields — but if approved, the project to convert the fields near the County Ice Center in Murray would make the fields the first owned by the county and made accessible to the general public.

While artificial turf reduces water use, critics say it is not an eco-friendly replacement for natural grass. According to The Guardian, turf can practically destroy the habitats of insects, bees and worms, by preventing the insects from burrowing into the soil to find food.

County spokeswoman Liz Sollis knows that turf is far from a perfect solution, but said it’s a step in the right direction for the county as Utah continues to face ongoing drought.

“With a 10-year lifespan, that gives you 10 years to save a lot of water, so I think that’s where the payoff is,” she said.

The artificial playing fields will have the added benefit of being usable year-round, she said, and will lower maintenance costs as well.

According to county officials, converting the playing fields will save about 6 million gallons of water annually, and the removal of grass on parking strips would save 5.3 million.

If all goes according to plan, the county hopes to have the new fields up and running by spring or summer next year. Companies to beautify roundabouts under DBKU’s jurisdiction with landscaping