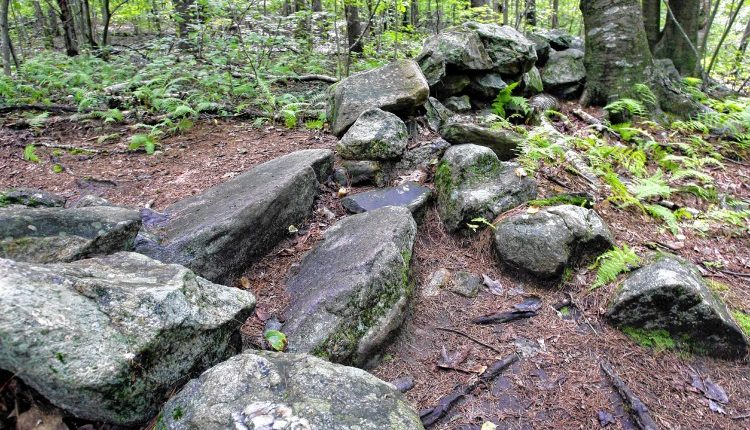 History and ecology of stone walls

Winter is a wonderful time to enjoy nature. When I do this, I often come across old stone walls in the forest. These relics of the history of our region tell many stories about past and present inhabitants of the landscape.

Most of New England’s stone walls were erected within 30 years from 1810 to 1840. During this time agriculture was a driving force and most of the residents were farmers. These intrepid farmers and their ancestors had cut trees in earlier decades to build houses, barns, and other buildings, and to open up land for crops and grazing. Early fences that housed cattle and sheep were made of wood and stumps from fallen trees.

In the early 1800s, merino sheep were brought to New England and things changed. The great sheep boom began. A global market for merino wool provided subsistence farmers with cash. More land was cleared and pastures were created, which were bordered by sturdy stone walls.

The stone structures were usually as high as a man’s thigh. Wooden fences were then added to raise the barriers to the height necessary to prevent sheep from escaping. Census reports show that New Hampshire lived 600,000 sheep in 1840. The surrounding states were also part of this movement, and it is estimated that over 250,000 miles of stone walls were erected in New England and New York during this period. The mass of these meandering piles of rock is said to be greater than that of the pyramids of Egypt.

It is remarkable to believe that the product of all this stone pulling and wall laying work was only used for a few decades. By 1850, New England farms were abandoned. The great exodus west had begun. Farming in deep, rich, rock-free soils of the midwestern prairie was much easier. Thanks to the Erie Canal and the expansion of the railways, the products of these farms could easily be shipped east. The open fields in New England, up to 80 percent of the landscape, grew back into forests. When we see walls pulling through the forest today, it is interesting to think that the land was not forested when the walls were built.

New England stone walls are not only an artifact of our agricultural past, but they are also a rich habitat for wildlife. They act as a barrier, collecting fallen leaves and debris that provide food and shelter for many small forest fauna. Most stone walls were built without mortar, gravity and the shape of the stones holding them together. As a result, miniature caves and tunnels are created in the spaces between the stones, providing ideal protection for small creatures.

Even in winter, when snow covers the ground, the walls are noticeable when they rise above the forest floor. It is worth taking a closer look to see which traces and signs remain as references to the current residents or visitors. Look for tiny mouse, chipmunk, squirrel, or weasel footprints coming in and out of the crevices. Larger mammals use the walls as a system of paths and leave traces along the partition. You can even find marks left by foxes by using the old farmer’s boundary wall to declare the boundaries of their territory by tipping their feces.

In the warmer months, countless invertebrates – insects, worms and spiders – live in the gaps in the stone walls. Reptiles like common garter snakes and forest frogs can use them as shelter and hibernation among them even in winter.

South-facing walls, where the snow melts faster, will absorb the sun, store the sun’s heat, and provide warmth to animals inside or near the walls. Snow-free stones also show a variety of lichens and moss growing on these mineral surfaces.

The peasants who built the great walls of New England are long gone. Their legacy lives on, however, as the remnants of their efforts continue to create boundaries for areas, shelter for animals and miniature green pastures, and add to the diversity of wildlife habitats.