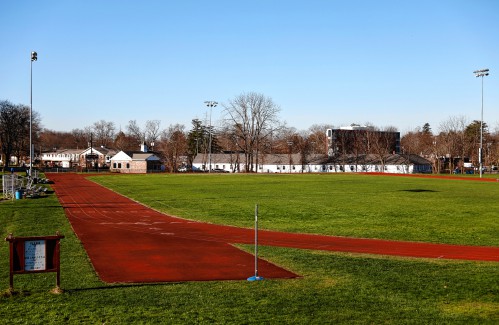 Health board against artificial turf field at Amherst Regional

AMHERST — Citing its duty to protect public health and the environment, the Board of Health is recommending against using artificial turf in a planned overhaul of the track and field at Amherst Regional High School.

The board voted 4-0 at its meeting Thursday to advise the Amherst Regional School Committee and district leaders to avoid putting down artificial turf as part of the $4.7 million project that would reorient the deteriorating track and place a synthetic playing surface in its interior.

“As a public health professional, I rely on precautionary principle,” said Chairwoman Nancy Gilbert, elaborating that principle states if a product is a suspected risk to public health, protective action should be taken even before there is scientific proof of that risk.

Gilbert said she worries that artificial turf — besides the possibility of leaching of per- and poly-fluoroalkyl substances, also known as PFAS compounds — may also contain lead and hormone-disrupting chemicals, create heat islands that would need watering on hot days, and cause injuries, such as skin abrasions and potential infection, to players.

The health board’s vote came after an oral request made by the Finance Committee this fall. The recommendation, though, comes a few days following the Town Council’s approval of $900,000 in free cash that will go toward the project. The preferred plan also depends on successful fundraising by the Amherst Hurricane Boosters, with the amount it has raised to be known by mid-January, when Superintendent Michael Morris anticipates seeking bids.

The Town Council is also considering adopting a resolution that would advise school officials to pay attention to the latest science related to artificial turf.

Health board member Maureen Millea said that ground-up tires, or in-fill crumb rubber, should not be part of any turf product used at the high school, and that the existing field could be substantially upgraded to a “very serviceable” field even without artificial turf.

“Right now it looks like it’s a problem — the in-fill with crumb rubber seems to be a big problem, and we don’t know enough about the other options, they haven’t been studied very well,” Millea said.

Millea cited information from the Toxics Use Reduction Institute at the University of Massachusetts Lowell campus, which said organic grass fields are functioning well across the state, and there is a possibility of artificial turf leaching out chemicals.

“It seems like a mistake to do this right now,” Millea said.

Even with board’s mission to promote public health and protect the environment, member Lauren Mills cautioned that the vote was not showing respect to the wishes of players and coaches.

“If the turf is what the athletes need, then I think that should be considered,” Mills said. She said she doesn’t want to add toxins to the environment, but wants students to be able to compete at their highest level.

Fellow board member Tim Randihir said PFAS is an important issue, but he also is concerned that microplastics could have potential impacts as a turf field installation starts to deteriorate. Randihir said there is evidence of heavy metals surfacing when turf is worn out.

While the health board focused on aspects of the project under its jurisdiction, Gilbert said there is agreement that the field is in poor condition and something has to be done.

“I support doing something to help the students there,” Gibert said.

Scott Merzbach can be reached at smerzbach@gazettenet.com.