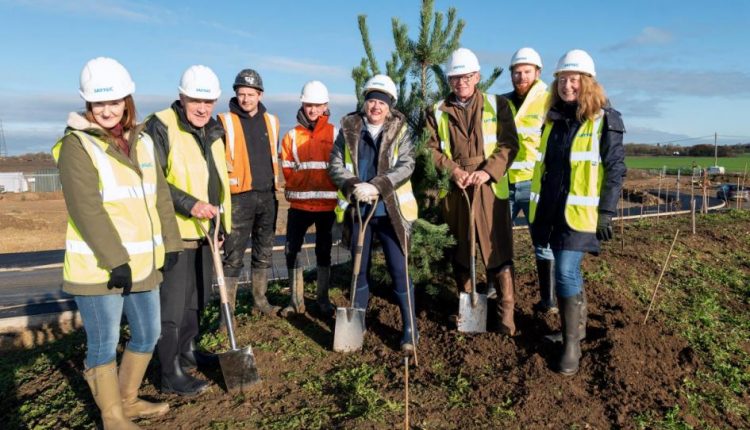 Thousands of trees are being planted at a huge new logistics park taking shape off the A14 at Stowmarket.

Gateway 14 Business, Innovation and Logistics Park – whose occupants are set to include homewares retailer The Range – is set to exceed a future legal requirement to include a 10% biodiversity gain with £700k-worth of meadowland and woodland landscaping around the site.

Planting plans mean it will have a net gain of nearly 14% for habitats and nearly 150% more hedgerow than previously. This takes it beyond the 10% biodiversity gain required under the government’s draft Environment Bill.

Among the structures being built at the site is a giant 1.2m sq ft warehouse for The Range which will create an estimated 1,650 jobs on the site.

The first of more than 15,500 trees was planted at a ceremony on site on Tuesday, December 6, attended by park owners Mid Suffolk District Council and developer Jaynic which is working in partnership with the council on the project.

Local tree warden group the Suffolk Tree Warden Network has grown various trees and plant species from local seed which will be planted alongside these as part of the landscaping scheme.

The £700,000 lanscaping contract is being undertaken by Bury St Edmunds based Pro-Scape Ltd and will include 70,000m sq of planting.

Mid Suffolk council leader Suzie Morley said: “It was always our ambition that landscaping at Gateway 14 would be a priority.

“The trees, shrubs and other planting will not only have time to establish before the first tenants move in but also, by introducing a range of planting we will be able to support natural wildlife habitats and meet our commitment to supporting biodiversity.”

Gateway 14 Ltd chairman Sir Christopher Haworth said the board was determined to enhance the bio-diversity of the site and create a “high-quality environment that the town can be proud of and that will be enjoyed by all those who come to the park” .

The landscaping scheme is designed by James Blake Associates and is largely made up of native planting that can adapt to environmental and climate changes.

Joe Clarke, senior commercial manager at Jaynic, described the work as “an important milestone” in the development of Gateway 14.

“Biodiversity on the site is a priority, with high-quality landscaping, green corridors and nesting boxes all being introduced to support not only the wildlife and ecology but also to create a vibrant, attractive, and healthy working environment for employees,” he said .

Proposed areas of open space include hard landscape and mown grass footpaths through orchards and wildflower meadows for access – with breakout spaces at intervals. There are also links to the wider footpath network.