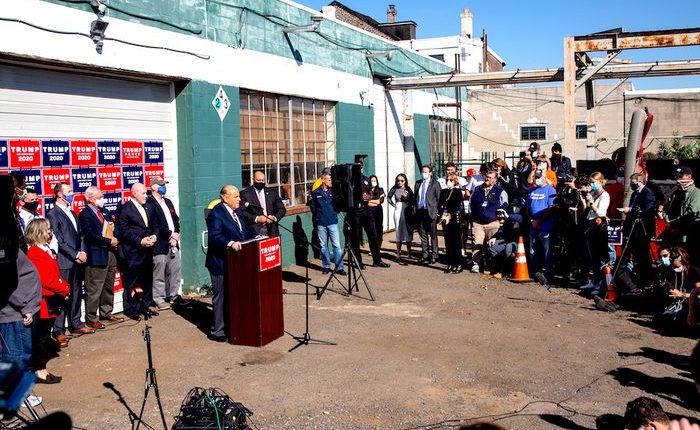 On Tuesday, the Philadelphia Inquirer published an interview with Marie Siravo, owner of Four Seasons Total Landscaping, and her staff. Siravo says not a day has passed since November 7th without a crowd outside when Rudy Giuliani was unlikely to choose his small business as the location for his press conference. A parking lot between a crematorium and a sex shop was surprising, especially considering it’s about ten miles from where election officials at the Philadelphia Convention Center continued to count votes. Many observers concluded that someone in the Trump campaign screwed it up and booked the event with Four Seasons Total Landscaping when it intended to include the Four Seasons Hotel. The president’s own tweets backed up this narrative, although his people assured the New York Times that “the mistake was not in the booking but in a mangled phone game” and Trump was simply misunderstood.

A likely story, I thought, and even White House staff who spoke to the Times seemed to agree, calling the mess a “Rudy Special.” Sean Middleton, sales director for Four Seasons Total Landscaping, told investigators that the choice actually seemed deliberate. Middleton says someone from the Trump campaign called around 8:45 a.m. that day and said they searched the I-95 corridor for locations to hold a press conference and would Four Seasons Total Landscaping be accessible?

“We found it nonchalant,” Middleton recalled. “It wasn’t even set that it would be Total Landscaping at Four Seasons, it was just, ‘Hey, you’re one of the areas.'”

Campaigners reportedly fell for Four Seasons Total Landscaping within ten minutes and “the deal was sealed at 9:45 am.” “I gave them the address, I said where we were, where to meet us, and that was it,” said Middleton. “It was a pretty quick set up, I mean, obviously you saw what came on TV.”

Indeed we have! And we will never forget it.