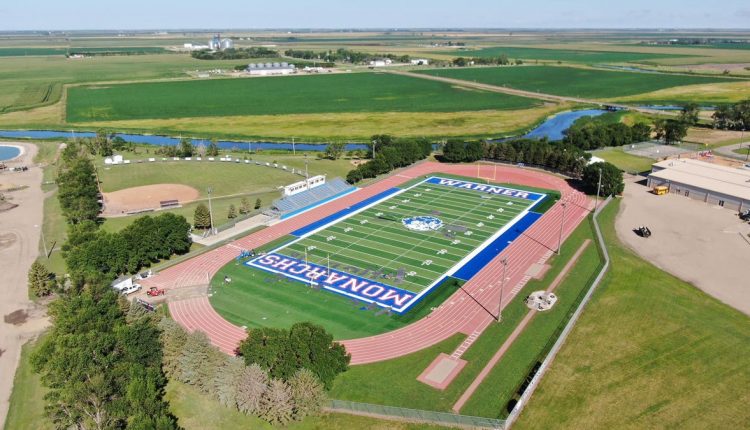 Football field in Warner gets artificial turf thanks to donations

The Warner football field will have a new look for the upcoming season thanks to a lot of help from the community.

Superintendent Michael Kroll said the district’s goal is to have the field ready for the football team’s first practice on Aug. 4, although the timeline is dependent on the weather.

The field will have artificial turf as opposed to the natural grass its had in the past.

Kroll said the work would not have been possible without the fundraising efforts of assistant football coach Keith Knuppe.

Knuppe helped raise money by sending out flyers to the community and with face-to-face visits, Kroll said. About $900,000 was raised in local community and business donations. That’s a big chunk of the overall cost, which was initially estimated to be about $1.3 million. The final total will be known once the project is finished, but Kroll said he is hopeful it will end up costing less than projected.

The football field is the last phase of renovations. The grandstand was upgraded several years ago. And last summer, the track was expanded from six to eight lanes, Kroll said.

Because of the track expansion, the football team lost a little practice space. But with the field renovation, Kroll said, it will get that space back. Part of the practice field was previously not used because of wear and tear, he said.

The initial plan for the field was to install underground irrigation to help maintain the grass, Kroll said. But Knuppe’s fundraising efforts allowed for field turf instead, which will be sturdier and more durable.

The new turf also provides more consistent conditions. The field will be in the same condition for the last game of the season in October as it is for the first game in August, Kroll said. South Dakota weather could cause the grass field to be soggy and muddy, but that’s no longer a concern.

Artificial turf will also cut back on maintenance costs, as the field will not have to be repeatedly be painted, watered or mowed.

The Monarchs’ first home game of the season is Aug. 19 against North Central.

California landscaping company gets 15 minutes of fame thanks to Tweet