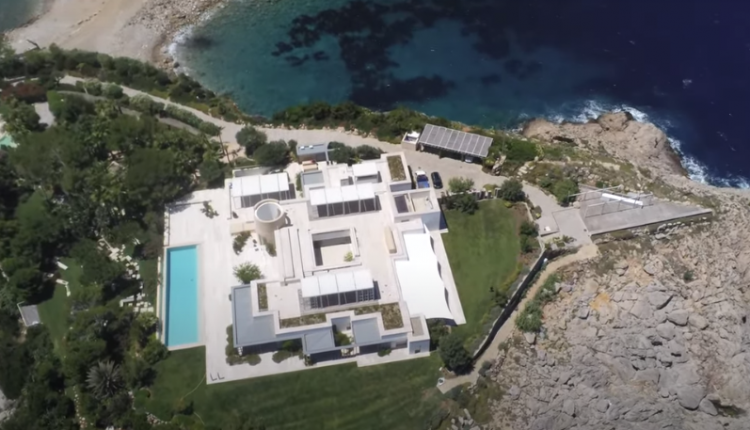 LIONEL Messi may have to knock down part of his new seaside villa in Ibiza.

The Argentinian football legend is also likely to be hit with a large fine for undertaking illegal works at his €11million mansion, near Cala Tarida.

The former Barca star, now with PSG in Paris, bought the home in February this year, without an official opening license (licencia de primera ocupación).

The property he bought from Swiss businessman Philippe Amon has too many rooms.

In particular, the garage block of the home has two unlicensed bedrooms and will ‘probably have to be demolished’ a spokesman at local San Jose town hall told the Olive Press.

“The villa has a problem with its license and to become a legal property he needs to turn those bedrooms into a garage,” he said today.

In addition, the Olive Press can reveal that Messi was also landed with a ‘stop order’ from nearby San Jose council in May for undertaking further works.

“We had to step in when we discovered they were doing some other land movement in the grounds without a proper license,” added the spokesman.

“They were carving out terraces to plant trees and so we had to stop the work.”

The issue is unlikely to be a big problem for the Argentinian star, who owns various other homes in Spain.

These include a hotel on the island, the MIM Ibiza Es Vive, a stunning four-storey spot near Ibiza Town, which features some of his medals and prizes.

Messi, 35, has been a regular visitor to Ibiza for years and spent much of August in his new villa, where he has reportedly splashed up to €5million in renovations.

He was also recently spotted on a yacht off Ibiza with his wife Antonela Roccuzzo.

Last year, he rented the amazing private island of Tagomago, off Cala San Vicente, which costs €250,000 a week.

The island, owned by Mallorca-based German estate agent Matthias Kuhn, is on sale for €157million.

Among those who have stayed on Tagomago in recent years are Cristiano Ronaldo and the Rolling Stones Ronnie Wood. Footballer Gareth Bale proposed to his wife on the island in 2016.

Harmful artificial turf can be made into a useful resource