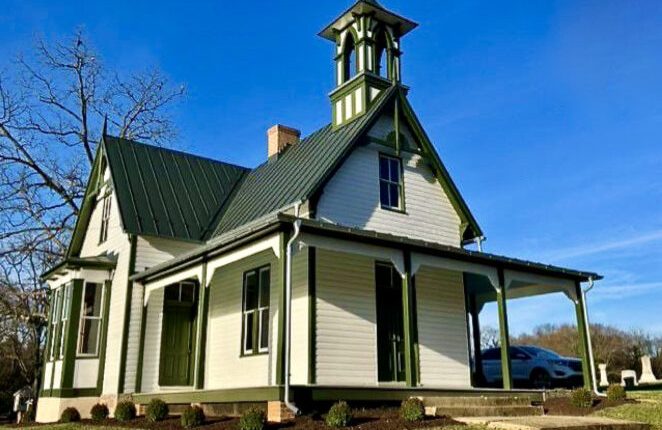 Landscaping was recently completed around the Superintendent’s House in Elmwood Cemetery. Courtesy photo

SHEPHERDSTOWN — Elmwood Cemetery recently received a donation from Betty Lowe to complete the landscaping around its Superintendent’s House.

The house was restored a few months ago, back in June 2022.

Lowe has been a board member of Elmwood Cemetery for around 30 years, and every year, she donates to the cemetery to help with different improvements throughout the year. This year, her donation was made in honor of her family, which includes her sons, John, Scott, Philip and Matthew Lowe, and daughter, Charlotte Lowe Davis.

Lowe’s initial decision to become an Elmwood Cemetery board member and donor was prompted by the cemetery’s historical significance to the community and the fact that generations of her ancestors have been buried in it.

“It’s important to me,” Lowe said. “Three or four generations of my ancestors were buried there. Plus, the grounds are beautiful. I want to keep it in good condition.”

After Lowe donated the money, Orion Home and Garden did the work.

“We moved old plants and shrubs out of the way and prepared planting beds around the building,” said Orion Home and Garden owner Scott Gordon.

According to Gordon, his company planted vegetation that will grow into hedges around Elmwood Cemetery’s Superintendent’s House.

Lowe’s thoughtful donation and Orion Home and Garden’s hard work will hopefully result, overall, in a more harmonious environment than the Superintendent’s House previously produced. For the board of directors, this improved environment will hopefully encourage more people to visit Elmwood Cemetery on a regular basis.

“People are encouraged to use the grounds,” Samuel Billmyer, president of the board of directors of Elmwood Cemetery, said. “People take walks around the cemetery and use the trails to walk their dogs. It important to the community, because the cemetery has been here since the 1860s, so it has a lot of history.”

Elmwood Cemetery’s board of directors decided to restore the Superintendent’s House as a part of the cemetery’s 150th anniversary year celebrations. While the house’s restoration was finished back in June, it took until this past week for the landscaping around it to be completed.

“It was an opportunity for the Lowe family to help the cemetery,” Billmyer said. “There were a lot of rock structures and other things. The landscaping helps give the house a finished look.”