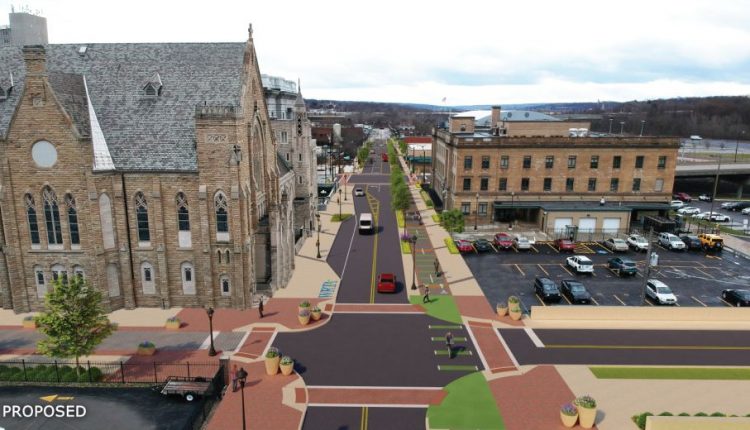 YOUNGSTOWN, Ohio – By this fall, the construction rubble that now represents Front Street downtown should be all but gone to make way for trees, boxwood, decorative grass and other landscaping, officials say.

The committee, which met Tuesday morning, also approved designs for three other downtown area projects, in some cases with conditions.

The redesign of Front Street from South Avenue to Vindicator Square involves shrinking the downtown street from five lanes to one lane each for westbound and westbound traffic plus a turn lane.

Elements of the new streetscape will include planting of Princeton elm, honey locust and ivory silk trees, as well as boxwoods, feather reed grass and irises among other plants. In addition, there will be new planters, garbage cans and a freestanding bicycle air kit, with tools for cyclists to use to make repairs.

The selected plants are similar to those on Phelps Street, Joe Banner, project manager with Marucci & Gaffney Excavating Co., Youngstown, said. The goal is to try to get most of the landscaping done this fall, if possible.

“Trees are time sensitive,” he said. Perennials likely will be planted in the spring.

The other three projects the committee considered involved building additions.

The branch is “having climate issues” with the existing storefront, Sansabrino said. His company is in the process of bidding materials for the work but the contractor “would like to start as soon as possible,” he said. Late August likely would be the earliest work would begin at the bank branch.

Charles Shasho, Youngstown deputy director of public works, advised Sansabrino there could be issues related to upcoming downtown construction work as well as the Greater Youngstown Italian Fest, which is scheduled for Aug. 5 to 7.

The building will retain the Silver’s name on the 27 W. Federal St. storefront but two smaller signs facing West Federal and South Phelps streets would be replaced with black aluminum signs with white vinyl lettering that reads “Retail Galleria.”

Lori Bowser, representing FastSigns in Boardman, said she did not have an opening date for the galleria. The building is owned by QuickMed Urgent Care, Liberty Township.

Hunter Morrison, an urban planning consultant for the city who is chairman of the committee, echoed the sentiment of other members who wanted to see a more comprehensive plan for the building’s exterior.

The theater, 702 Mahoning Ave., earlier had sought approval for a small addition to the building to provide improved access but cost estimates put the project “just way out of budget,” Kevin Willis, principal at Strollo Architects, Youngstown, said. The ramp is being designed to accommodate the addition of the theater moves forward with it for additional restrooms.

Members of the committee, who wanted to see how the ramp would tie to the sidewalk and parking lot, approved the ramp with the understanding that an overall site plan would be forthcoming.