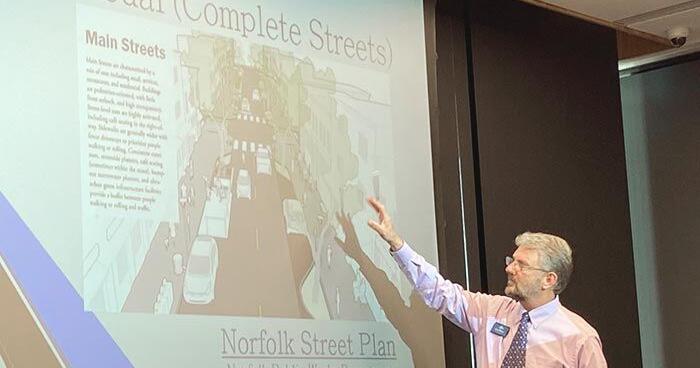 Modern engineers are designing future streets to take into account more than cars.

Rames introduced the concept Monday evening to the public during the city’s one- and six-year street improvement plans at the Norfolk Public Library.

Complete Streets are characterized by a mix of uses. They can feature trees, planters, more green space or even café seating in parts of the streets where there isn’t parking.

“Bicycles, pedestrians — all kinds of things that need to use that corridor — we want to make sure that all those things are accessible for all. Last year we put in mid-walk crossings. Those are not ADA (Americans with Disabilities Act) accessible right now,” Rames said.

“Those are some of the things that Complete Streets are,” Rames said. “So if you hear us talking to the council about it or hear the council talking about it, that’s what that is.”

Many communities have started the work in their downtowns where there are often multiple uses of the streets.

A person attending the one- and six-year discussion asked if Norfolk could afford to work on Complete Streets if the city had other streets that also need repairs.

Rames said the Complete Streets are redone when the streets need overall repair. Then the utilities and design features can be incorporated when the streets are torn up, and it costs about the same as redoing the street in a traditional way, he said.

Karen Nalow and Eric Silvey of Clark & ​​Enersen, a Lincoln company that has services that include landscape architecture, spoke during the discussion Monday. They are looking for ways to beautify the two main highways in Norfolk.

Soon discussed how the business has been updating the city’s current landscaping master plan. What the city does with landscaping can have an impact on a city’s identity, she said.

As people are visiting the community and even for those who live in Norfolk, the type of landscaping, greenspace, artwork or banners on such things as light poles help determine people’s impressions.

Norfolk’s main corridors — Highway 275 and Highway 81 — were divided into sections in the plan. Depending on the location of the corridor, there are varying amounts of space available for landscaping improvements.

Oftentimes, the community looks for a “ribbon” that ties it all together. It could be something like agriculture, or the Elkhorn River, or transportation like a railroad. It is up to the people to determine and how it is incorporated.

Clark & ​​Enersen is seeking to get public input on the city’s master plan. To view it and offer comments, go to the city’s website at https://norfolkne.gov/ and click on government in the blue banner and scroll down to engineering.