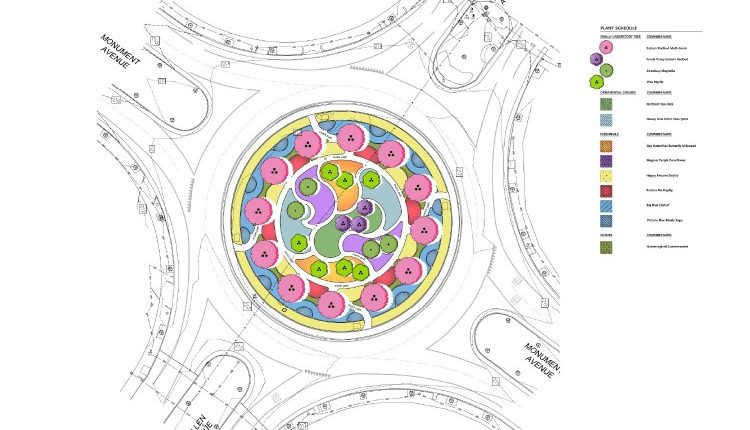 A city advisory board was not able to meet as planned on Thursday, preventing it from making recommendations on a proposal for temporary landscaping at the former site of the Robert E. Lee Monument.

The Urban Design Committee did not have a quorum, the minimum number of people to conduct official business, after a member had an emergency, preventing the body from making recommendations on the proposal submitted by VHB, to an outside engineering firm. As currently envisioned, mulch paths would cut through beds of low-maintenance plants, which could be removed easily once a more permanent redesign for the traffic circle is realized.

The speed bump in the process delays public discussion — and possible recommendations from the UDC — on how the landscaping could affect the largest roundabout on Monument Avenue being used as a gathering space in the future.

“The Lee circle was reclaimed by people and used by people the way they wanted it to be used. It really became a self-designed city asset. And now that that’s been taken away, and the city’s putting plans in place, people need to be very active in communicating what they want from that space,” said UDC member Jessie Gemmer in an interview Wednesday.

The area around the statue was dubbed “Marcus-David Peters Circle” by protestors in 2020, after a Richmond man who was killed by police in 2018. On June 4, 2020, former Gov. Ralph Northam ordered the removal of the Lee statue, which was on state land. About two weeks later, concrete barriers went up around the circle, and then in January 2021, the state fenced in the circle, closing it to the public.

“Public spaces exist on a continuum of order and management,” said Beth Meyer, a professor at the University of Virginia who’s an expert on landscaping and public space. “I’m an idealist when it comes to public space, thinking that I’d give up a little bit of the order and management because I want to be in a place that feels like it’s open to everyone, so that I don’t see people just like me.”

Todd Woodson, another committee member, said in an interview Wednesday that he liked the current plan.

“I look at this as the beginning of a healing process, the continuation of what’s gone on there. There’s really nothing more healing than nature,” he said. “I would like to see some seating.”

The proposal garnered 10 pieces of written public comment. Some comments called for the space to encourage conversations highlighted during the 2020 protests, while two self-described Monument Avenue residents wrote that opening up the circle to pedestrians would attract “an element wishing to start trouble.”

Traffic safety was also among the concerns written about.

Kevin Vonck, planning director for the city, told members present at the meeting that he would ask the planning commission chairperson to put the proposal on the regular agenda and consider referring it back to the UDC for recommendations before a commission vote.

“In the interest of timeliness for some of our [design] applicants, I want them to continue on through the process,” Vonck said.

The state’s Department of General Services owns barriers and fencing around the circle, a spokesperson from the department said in an email. The city is to deliver them to the state at no cost to the department when they are removed. The land was conveyed to the city just before Northam left office earlier this year.

The transfer from the state to the city meant that The Virginia Museum of Fine Art, which had received tax money to create new, permanent designs for Monument Avenue and the areas occupied by Confederate monuments, would no longer be involved.

Meyer, the professor at UVA, said thoughtfulness is absolutely necessary in designing new spaces after the removal of monuments.