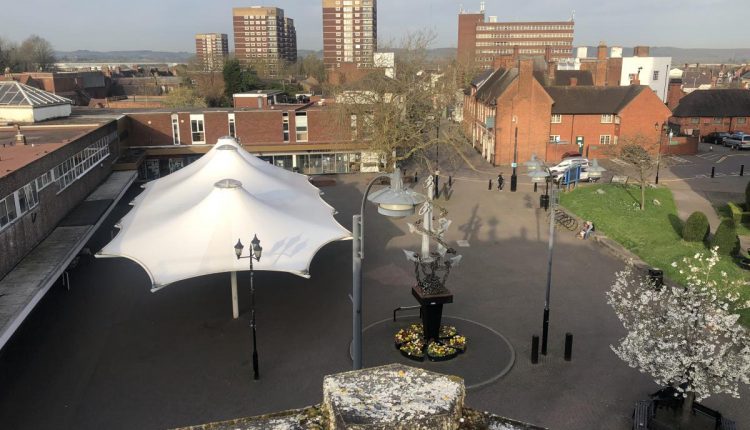 As Tamworth Borough Council begin work on progressing its plans for the town center Future High Streets project, work to remove the canopy in St Editha’s square will start on October 31.

The canopy that was originally installed almost 15 years ago, will now be removed to make way for the new landscaping and public realm improvements that will be created following the new college build on the old 1960s Co-op site.

Contractors Armac, have now started on site and have been commissioned to demolish the department store, carry out the strip out of the Victorian building and remove the canopy.

Key to the Future High Streets project is the relocation of a brand-new Tamworth College into the heart of the town centre. South Staffordshire College is leading this part of the town center redevelopment which will see the new college built on the old 1960s part Co-op site. South Staffordshire College aim to open the new facility from September 2024.

Once all work on the new college building is complete, Tamworth Borough Council will carry out a full re-landscaping of St Editha’s square which will include new seating and a public realm meeting space that will support enhanced activity.

Options to relocate the canopy have been explored, but due to its age is not possible. Locals are to be reassured that the anker monument will stay as an integral part of our town’s history.

Councilor Jeremy Oates, Leader of Tamworth Borough Council, said: “It’s a positive move to see our plans progressing. The demolition of the 1960s Co-op building begins this month, ready for the new and modern college to be built, and the canopy outside the indoor market will be removed from October 31.

“We aim to minimize disruption to town center businesses the best we can, and the canopy removal work is planned to be completed by November 7.

“The canopy has served as a sheltered area for the outdoor market stalls and customers for nearly two decades, but due to its age, the structure will need to be removed carefully and the area made safe, to allow the new public realm work to take place after the new college building work is completed.

“The regeneration of Tamworth town center is a key priority and we all need to pull together to fight for its future.”

The canopy is being removed as part of the contract with Armac to ensure that costs are managed effectively and no additional contractor costs are incurred at a later date.

The bid to Government was put together in partnership with landlords, businesses and organizations, following months of public engagement, detailed research and feasibility studies.

Tamworth was awarded £21.65million from the Future High Streets Fund to develop a town center that meets the needs of 21st century shoppers, residents and businesses.

Further exciting plans for the town center include: