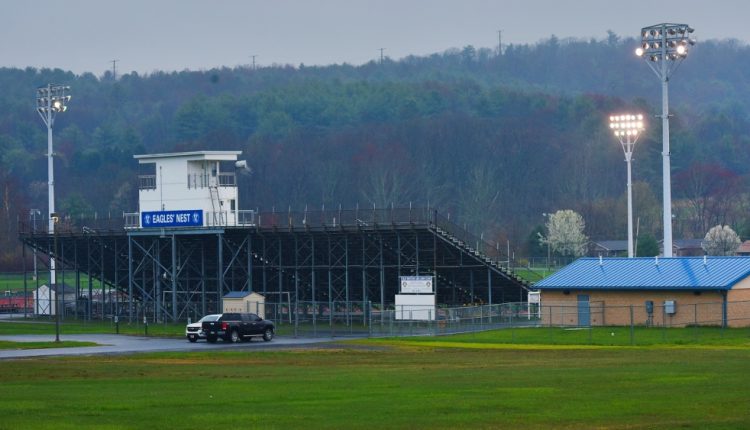 In a surprise decision, the Blue Mountain School Board voted 6-2 on Dec. 21 to approve the installation of artificial turf on two athletic fields.

The proposal was not presented to the public until just prior to the vote, but coaches and parents of athletes showed up in numbers to support the idea.

Board member Roy Heim presented the proposal. While stating that he had opposed installing artificial turf, Heim said that after studying the pros and cons and speaking with representatives, he now supported the $3 million project.

“For a guy who was not for turf in the beginning, if we are going to get private funding for $1.4 million, be able to use the field six days a week and have the community able to use it, I think it’s almost a no -brainer,” Heim said.

Becky Hoover, parent of three Blue Mountain students, is at the helm of the effort to raise funds for the project, having already raised $750,000 in donations from only eight individuals.

As to where the rest of the funding will come from, Heim cited lower maintenance costs, arguing that the project would be cost neutral with a savings of $100,000 per year that will almost cover the outstanding balance over the 12–15-year life span of the turf

The board did not have a firm answer as to where the balance of funds would come from. Board members Rosanne Zelusky and David Lafko voted against the proposal, citing issues with the funding and lack of public feedback.

Hoover said she can raise more funds now that the board has backed the proposal.

“No one hesitated to donate the money,” Hoover said. “I asked eight individuals who donated $750,000 within a month. There are probably 20 more phone calls I have out there, but they needed to hear that the school was backing the project before they committed. I have no doubt I can raise the money.”

Lafko expressed safety concerns as one of his reasons for opposing the plan.

“The reason I voted against the proposal is that no one is able to show that artificial turf is safer than grass,” Lafko said. “The only evidence we have to support this theory is from the manufacturers or sellers of the product.”

Lafko went on to congratulate Hoover on her success in obtaining donors.

“I congratulate the people who worked so hard to get the donations to get this project off the ground,” he said.

Zelusky pressed for answers as to where the funding would come from and what impact it would have on the taxpayers.

“While thanking the donors in advance, where would we come up with the remainder of the money?” Zelusky asked. “I appreciate the donors, but if you raise taxes to pay for a field, they’re going to say no. We need a definite answer as to where the money will come from.”

dr Timothy Grube was absent from the meeting.

“I’ve been here for 30 years and have been trying to get the turf the whole time,” Morgan said.
He cited six primary reasons for installing the turf: Expansion of the classroom; increased usage time; lower maintenance costs; better for the environment; less of an expense over time; works well in all climates

Morgan noted that due to breakdown of the fields after high usage it is necessary for the district to limit the amount of playing time to three or four events a week, and district officials at times have deemed the field unsafe.

“The main advantage of artificial turf is the invaluable element of enhanced safety and the opportunity to promote our school district and community,” Gallagher said.

Parents and former coaches including Mike Polak, Joseph Chipriano and Clayton Leibold also spoke in favor of installing the turf, citing safety, building a legacy for the district and pride in the school.

“I spent the last 50 years of my life here in Schuylkill County,” Polak said, “my two children and five grandchildren have all been students here in the district. When approached and asked if I would participate in this endeavor, I knew that this was my opportunity to give back to the school district that has educated my two children and continues to educate my grandchildren.”

Research tends to both support and contradictory safety statistics. While one site may state that artificial turf is safer and results in less injury to players, another site states the opposite.

Board member Anne Usuka requested peer review statements to back up the safety statistics regarding turf versus grass but voted for the project despite not having the information.

“Albitz was a great lady who was dedicated to her job as a teacher’s aide at the East,” Helsel said. “She loved our children and worked very hard. Even while facing medical challenges, she continued to want to work.”

The next Committee of the Whole meeting is scheduled for January 19 in the Blue Mountain District Office following the Reorganization Meeting. The regular meeting will be held January 26.

Rs21m being spent on landscaping of IJP Road