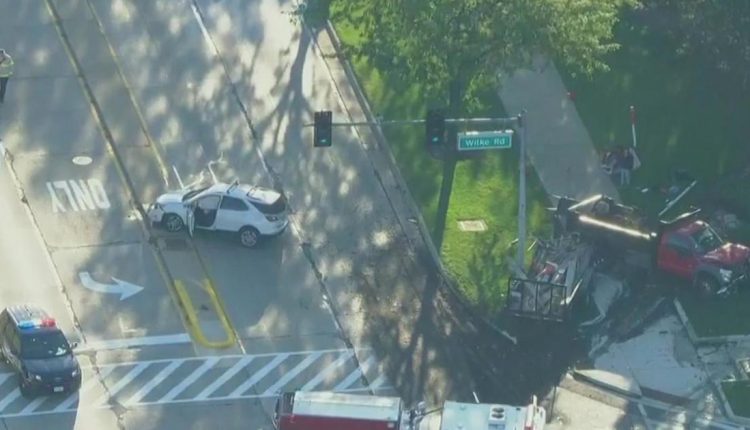 CHICAGO (CBS) – Police closed Lake Cook Road in both directions between Wilke Road and Route 53 after a crash sent a landscaping truck onto the sidewalk and into a bicyclist.

Chopper 2 spotted the truck on the sidewalk – spilling a lot of dirt as it skidded off the road. The bike is located just under the driver’s side of the truck.

The 2019 Chevrolet Equinox spun around and stayed in the eastbound lanes of traffic while the 2011 Ford F550 left the road to the southeast and struck the bicyclist.

The bicyclist, a 43-year-old woman from unincorporated Arlington Heights, suffered life-threatening injuries and was transported to Lutheran General Hospital.

The driver of the Chevrolet was transported by Palatine Fire Department Paramedics to Northwest Community Hospital for treatment of non-life-threatening injuries. The driver of the Ford and his passenger were uninjured in the crash.

The Cook County Sheriff’s Department and Buffalo Grove Police Department are assisting Arlington Heights Police with the diversion of traffic around the crash scene.

The public is advised to avoid Lake Cook Road between Route 53 and Arlington Heights Road.

The crash remains under investigation

Volunteers step up to give City Hall a landscaping redo