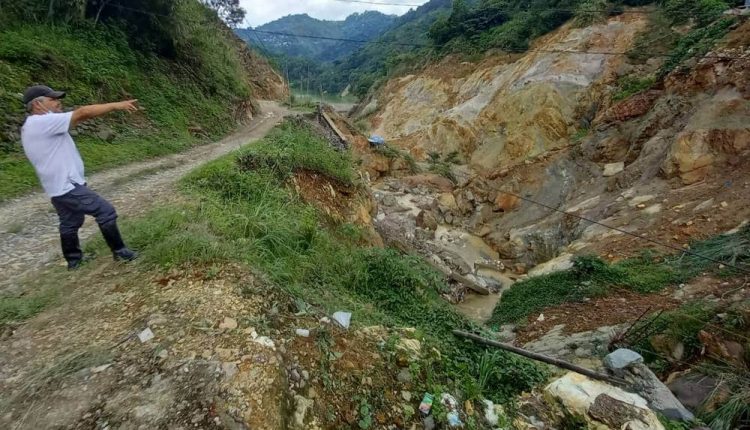 JOHN Lantungan, President of the Luneta Miners Association Inc. in Itogon, Benguet, points to the area where a concrete retaining wall must be built. ITOGON, Benguet – Residents of this town, mostly pocket miners, have asked the government for help in repairing and constructing concrete retaining walls on the banks of the Antamok River which will protect their livelihood against calamities.

Several parts of the decades-old concrete retaining wall collapsed in the earthquake. This was only one meter away from houses and poses great danger to the lives of the residents.

Residents also found some cracks in the foundation of a foot bridge which was built a few years ago.

“This is our problem especially during the rainy season, the large volume of water from the upstream river (Antamok) can completely destroy the hanging walls (rip-raps) causing widespread destruction in the community,” said John Lantungan, president of the Luneta Miners Association Inc.

Lantungan said they were no longer able to mine after the earthquake because of the constant aftershocks. He prohibited miners from performing any mining operation and entering the tunnel to avoid any disaster.

A few years ago, a public school in the community and several houses were damaged and many were injured when a combined mud and rock slide caused by a typhoon occurred.

A 13-hectare relocation site intended for the victims of the tragedy was offered by the government and Benguet Corp. but it was not fulfilled.

According to Ernesto Delia, one of the elders of the community, who also serves as an adviser to the LMA, residents in the area have been living for decades and mining is part of their lives.

He said this upcoming face-to-face class, one of their big problems is when open pit mining overflows with cascading water from the Antamok River and when the downstream no longer passable, school children and others cannot pass and no longer able to go to school.

“And when isolated, the supply of food and other basic needs is reduced. People in the area experienced difficulty in transporting patients with emergency cases,” Delia said.

“What Goes Around Comes Around”: Landscaping Owner Scams $400 Out Of This Guy, Ends Up Paying $15,000 After Getting A Taste Of His Own Medicine