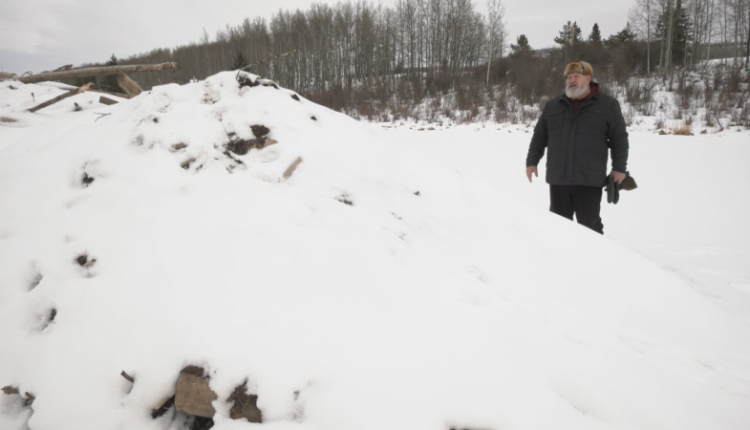 When a man living near Bragg Creek needed help tackling a major landscaping project, he knew the perfect architects for the job were members of a local colony.

Pierre Bolduc knew he wanted a team for whom building and designing was second nature and he found them beneath a pile of frozen wood and mud.

Bolduc bought land in the area west of Calgary about 16 years ago and immediately discovered the well on the property wasn’t doing an adequate job.

“There (were) a lot of occasions (where) we would run out of water and my wife would be rather upset,” said Bolduc. “We would have to wait until the aquifer replenished the ground close to the well in order for us to be able to have some drinking water.”

A creek ran through the property and Bolduc wrongly assumed he could build a capable dam to retain water on his land.

“The first rain came and the little dam is that I had set up for a foot (high) totally collapsed. So obviously I wasn’t the right person to conduct such a construction so I have to get the professionals.

“And the professionals definitely are the beavers.”

In a near perfect marriage of headaches, Bolduc’s neighbor had an uninvited colony of beavers that he considered a nuisance and Bolduc welcomed the rodents to his side of the property line with open arms.

The beavers soon constructed a lodge that not only ensured the well never ran dry, but created a large pond in Bolduc’s backyard.

“It increased the water table by six to eight feet, solved my problem with the well, no more upset wife which is fantastic,” Bolduc told CTV News. “At the end, it was a wonderful place for the kids and I to come skating.”

It’s not just the neighbors that enjoy the new pond, so does the wildlife. Moose and bears have been spotted in the water, occasionally at the same time.

The descendants of the Buldocs’ initial semiquatic tenants are thriving at their adopted home.

“They’ve become grandparents and perished,” explained Buldoc. “At one point I had approximately 12 beavers, which is unheard of. I was able to count them in a video with a drone and I couldn’t believe how prolific they were.”

The beaver numbers on the property are so strong that some of the animals have since migrated and built homes downstream.