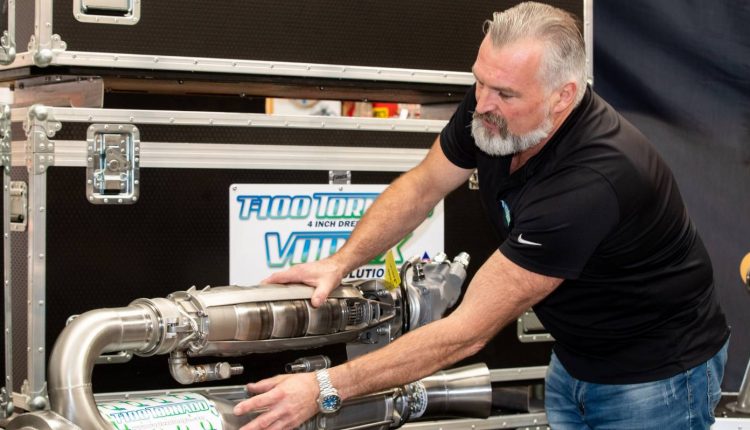 Tucked away in a mammoth workshop at his rural New Plymouth property, Joe Goodin can be found designing his way to offshore success.

In his backyard, Goodin, managing director of Vortex International, has created the most powerful dredge in the world.

The tool – basically an underwater vacuum cleaner – is so effective, the 48-year-old has had the design patented and exports it overseas, including to Brazil where 11 will head on Monday in a deal worth around $800,000.

”Must be busy in Brazil,” said Goodin, who explained that his machine’s vortex motion makes it more efficient than any other of its kind.

“We stumbled across it through trial and error,” he said.

“It’s very much like you pull the plug out of your drain and there’s that rotary motion that creates a massive big vacuum, and you tip a bottle upside down and shake it, that spinning action will speed the water up and that’s the fastest way to empty a two-liter bottle of Coke.”

But as with most success stories, Goodin’s journey has been long and bumpy.

Around 25 years ago he was working on oil rigs around the world as an ROV (Remote Operated Vehicle) operator.

It was during this time that he found the tools being used just weren’t really that “flash”.

“I thought, ‘There’s got to be a better way of doing it.’

“When you’re out there, and there could be an oil rig running at half a million dollars a day that’s broken down and they’re waiting on you, you tend to get a bit of heat on you.”

Goodin, pictured with 13-year-old son Lenny, has been exporting the dredges worldwide and has 11 heading to Brazil this week.

Having grown up on a farm, Goodin has bred into him the “can do attitude” and so he took it upon himself to develop better tools.

The dredge was where it all started.

He developed one, took it offshore, borrowed an ROV and gave it a whirl.

Goodin didn’t give up. He learned from it and built another. He took that one offshore and it worked “really, really well”.

He got a patent on it and kicked off his company.

But then Goodin got involved with a “corrupt operator” who “scammed us into signing a dodgy contract” which cost him $150,000 to buy out of.

He then got wind of an offshore operator who had copied the dredge design.

“We took them to task with lawyers all the way to Paris and won.”

Goodin then went to Aberdeen and met with Ashtead Technology, regarded as the world’s largest offshore rental company with the highest performing equipment.

“They took us on and we’ve grown from there. We’ve been supplying them exclusively since 2009 and the business has just grown into all sorts of different things.

“Nothing’s easy but we just didn’t give up.”

While it started with dredges, he also designed winches, survey tools and cutting equipment which are also exported globally.

The prototypes are still built in Goodin’s workshop, but the business has grown to such an extent that he now farms out their production.

“We spread it out to different companies around Taranaki. They each might do a different piece of the puzzle.

“The biggest thing we’ve found through all of this is the amount of expertise of engineering and machine shops here. It’s absolutely world class.”

Goodin’s family has also been brought into the business and his son Lenny, 13, is using the machinery and growing an understanding of how the equipment works.

“Dad’s a pretty good teacher. He walks me through everything,” Lenny, who’s interested in offshore surveying, said.

What the Heck Is an Oyster Oven? This and Other Puzzling Backyard Design Choices on…