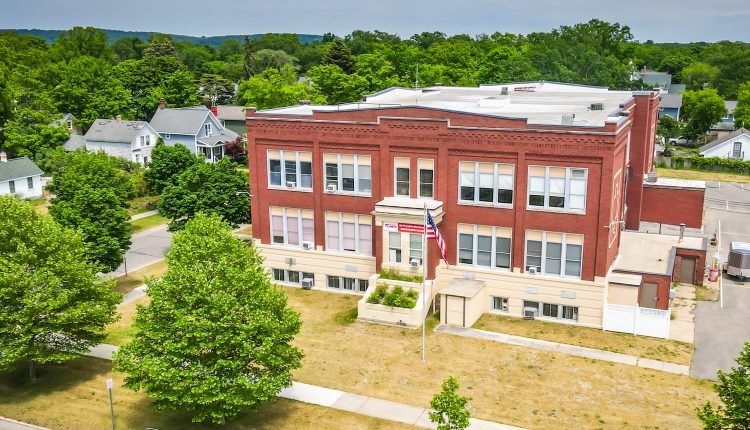 Traverse City Area Public Schools (TCAPS) is preparing for its next major round of projects, including the installation of artificial turf fields at Traverse City Central and West high schools. TCAPS board members Monday approved moving ahead with the $2.1 million turf replacement – ​​which will reduce the need for multiple high schools and sports to all share Thirlby Field – and approved a resolution authorizing preparations for the sale of $32 million in bonds this spring to fund more projects from the 2018 bond list.

Both TC Central and West high schools will have their grass playing fields removed in 2023 and replaced with synthetic turf. Multiple contractors bid on – and will be awarded – different aspects of the project, from demolition to concrete work to asphalt paving to turf installation. The combined contracts total $2.1 million. Work is anticipated to begin in May and be substantially complete by August, according to bid documents. The fields are expected to have a life expectancy of at least 12-15 years.

TCAPS Superintendent Dr. John VanWagoner noted that all TCAPS high schools—as well as St. Francis—use Thirlby Field and its artificial turf due to the lack of alternatives in the district. “It’s one field servicing three high schools that we have tons of scheduling issues with,” he said. With growth occurring in multiple sports – including lacrosse, with VanWagoner anticipating that a joint Central-West boys team will soon split into two teams and a girls lacrosse team could come online – installing artificial practice fields at both high schools will help alleviate conflicts and “ completes all of our outdoor facilities for sports at this point,” VanWagoner said.

Funding for the turf replacement will come by scaling back a $10 million budget for new STEM labs – part of a list of projects covered in the district’s $107 million bond proposal approved by voters in 2018. Some residents expressed concerns to TCAPS board members about reducing the STEM labs budget to pay for the artificial fields. However, VanWagoner said that the initial $10 million estimate for the labs was created when TCAPS anticipated having to build out new facilities. With both high schools experiencing declining enrollment, TCAPS now has empty classrooms at both high schools that can converted into space for STEM labs, he said.

VanWagoner, who himself has a daughter in TCAPS robotics, promised that enough funding remains to build “first-class facilities” for the new labs. Planning work for the labs will take place in 2023, with construction slated for 2024. TCAPS Trustee Erica Moon Mohr said that while it made sense to repurpose unused spaces instead of building new ones – “we don’t want classrooms sitting empty,” she said – she believed TCAPS should “reassure the public” that the project won’t consist of haphazardly retrofitting classrooms but ensuring that the labs are as state-of-the-art as the new fields.

Board President Scott Newman-Bale and Trustee Matt Anderson said they were confident both projects could proceed with 2018 bond funds. “Everybody here recognizes how important that is, that we follow through with that commitment (to build the STEM labs),” said Anderson. He added that the new artificial turf fields will also “get heavy use, and it’s getting us finally to a level that we’ve needed to be at for a long time.” Newman-Bale added there are still “a lot of projects” TCAPS plans to cover under the 2018 bond proceeds. “I am confident that we do have a lot of space (in the budget to fund the labs),” he said.

The next round of projects to use 2018 bond proceeds is on the horizon, as TCAPS board members voted Monday to approve a resolution authorizing staff to begin preparations for issuing another $32 million in bonds this spring. One major project on deck – estimated at $6 million and set to take place next year – is renovating and paving the district’s transportation parking lot and installing a new bus/vehicle wash.

In a recent committee meeting, TCAPS Associate Superintendent of Finance and Operations Christine Thomas-Hill noted the district owns 95 school buses and 27 other department vehicles, totaling approximately $10 million in assets. Those vehicles are now parked on a dirt parking lot that requires annual upkeep of over $21,000 – including brining, gravel spreading, and grading – that can’t be covered by bonds and must come out of the general fund. The dirt lot is uneven and dangerous, Thomas-Hill said, frequently requiring buses to be towed out of their spaces due to getting stuck and generating six workers’ compensation claims in the last five years “directly related to parking lot injuries.” Thomas-Hill said those claims resulted in 129 lost driving days, with some drivers injured seriously enough they ultimately didn’t return to work for TCAPS.

The dirt lot also means TCAPS doesn’t wash its buses as often as it should. Rather than washing buses every 10 days – an industry best practice in the winter to avoid salt accumulating on vehicles and corroding frames – TCAPS washes the buses two or three times per season, Thomas-Hill said. Part of the reason for that is that TCAPS can’t wash the buses on the dirt lot due to environmental regulations. Instead, the district has to pay a professional company to collect runoff water as buses are washed to ensure it doesn’t infiltrate the Boardman River watershed – an expense TCAPS can’t afford to incur every 10 days. Thomas-Hill said that if the district could more regularly wash its buses, it could likely extend vehicle lifespans by two to three years – saving up to $200,000 annually in bus replacement costs.

Plans next year call for paving the lot – including installing on-site water collection and retention systems – and adding an on-site bus/vehicle wash. TCAPS also plans to seek bid options to run conduit under one row of buses for future use of electric buses or vehicles. Construction is anticipated to start in April and be completed by August. “I think this is important…especially if it’s going to extend the life of some of our higher-value assets,” said Board Treasurer Andrew Raymond at the committee meeting. Board Vice President Flournoy Humphreys agreed, noting the parking lot was “treacherous” to navigate and said spending $21,000 for its upkeep every year was akin to putting “lipstick on a pig.”

Other projects covered in the next $32 million in bond sales will include renovations to the main office at Traverse Heights, new fencing around the entire periphery of Thirlby Field, new heat pumps (including at Central High), and annual allocations for doors/hardware, security software, and playground upgrades. Funding will also cover allocations for technology, transportation, visual/performing arts, athletics, and operational equipment, according to Thomas-Hill. Another $3 million will cover contingencies – staff noted that line item could go toward the STEM labs, if needed, or possible improvements at Sabin. After this round of bond sales, a final sale will likely take place in 2025 for the nearly $11 million left on the 2018 bond authorization, Thomas-Hill said.

Greenway works to take landscaping to another level