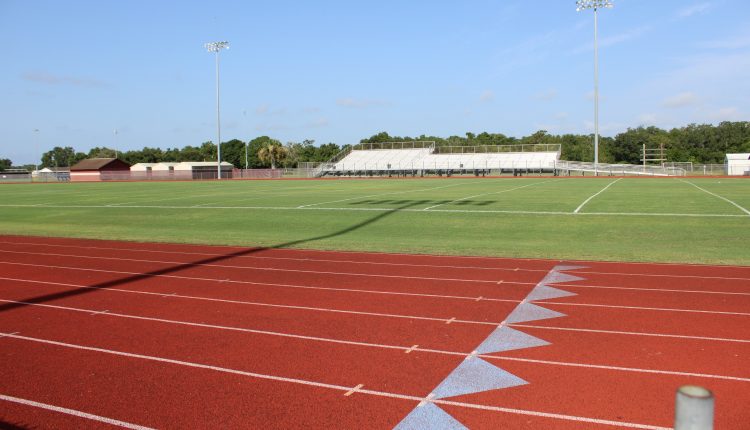 By Lindsey Tellez
For the News Gazette

Currently, Celebration High on the west side of the county is the only Osceola County school facility with artificial turf.

Booth — wearing his Bulldogs’ varsity jacket from a 1992-95 football and baseball career at his alma mater — said the county and school district plan to break ground on Feb. 1, with the hope that it’s ready for the 2023 fall season, and it’s going to be a game changer.

“I definitely believe that this joint effort between the county and the school district to upgrade this field will benefit the residents of District 5 for many, many years,” Booth said. “It really is all about the kids.”

In addition to School District funds already earmarked in the annual budget of upwards of $200,000 for field maintenance, the remaining funds will come from the American Rescue Plan the federal government sent to the county.

“If we’re going to be given that money, I’m going to invest it in the kids in our community, and that’s what we’re doing here today,” Booth said.

Booth said he believes the field upgrade will lead to a nice return on investment for the high school and the city of St. Cloud. They will be able to host events there year round, with no worries about maintenance.

St. Cloud’s athletic director Bryan Smart said he is beyond proud of having the opportunity to turn their dream into reality.

St. Cloud principal Nate Fancher explained why this project means so much to the parents, coaches, and faculty.

“They live here in this community, their kids go here, and they are passionate about making this community a better place,” he said. “I can’t stress enough what an enormously big deal this is going to be.”

Booth said the possibilities are endless, and he’s dedicated to seeing it through to the finish line.

“As a former player and a parent of athletes, I understand the importance of playing on a field that is safe and allows for the flexibility of different events while also creating opportunities for even more groups to utilize it.”

The Bulldogs’ football, soccer, and girls flag football use Gannarelli Field during the year, and both Booth and Smart, who just resigned from coaching football at SCHS to become its AD, noted how the current grass field does not drain well after a heavy rainstorm. A turf field that requires minimal maintenance could also be used, in an example, on a Saturday by youth football leagues after a Friday night varsity game (and Thursday freshmen and varsity games).

Smart vendors or contractors for the project have not yet been secured, something he can now do with funding now locked in.