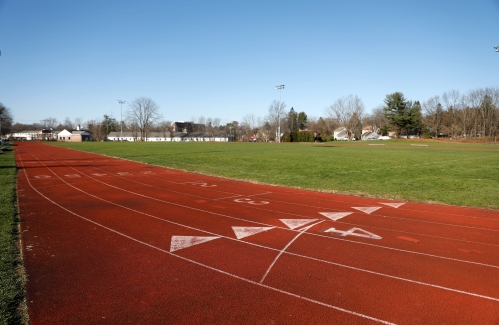 AMHERST — Reorienting and rebuilding the Amherst Regional High School track so it has eight lanes, and installing an artificial turf playing field in its interior, remains the preferred project for the Amherst-Pelham Regional School Committee.

At a four-hour meeting Tuesday that concluded after members voted down a statement perceived as a reprimand of Amherst representative Jennifer Shiao — who has been raising concerns about synthetic turf possibly containing dangerous PFAS chemicals — the committee voted 8-1, with Shiao the lone dissenter, to reiterate to the Town Council its support for the $4.74 million track and field plan.

The vote also endorses a letter to town councilors from Superintendent Michael Morris and Athletic Director Victoria Dawson explaining the scope of needs for athletic fields should the project not happen, including more extensive work by the town’s Department of Public Works.

Shiao said she was worried that the missive from Morris and Dawson demanded that all Community Preservation Act money in Amherst be directed toward the high school athletic fields.

The committee’s action precedes the council meeting on Monday, when councilors may reconsider their 6-6 vote on Nov. 21 that nixed the use of $900,000 in free cash for the project. The track plans also depend on significant fundraising by the Amherst Hurricane Boosters group.

ARHS Committee representative Allison McDonald said though concerns about PFAS chemicals have been raised, she and others have completed a detailed, several-year analysis of the project, and there has been no “dereliction of duty.” McDonald said a grass field surface wouldn’t address the continuing issue of overuse of playing fields.

“That is one of our chief problems in maintaining the fields,” McDonald said.

Amherst representative Peter Demling said recommending a grass field would require buy-in from the other regional towns — Pelham, Shutesbury and Leverett — and a delay in the project to Town Meeting season. Demling said it is important to have an artificial turf field to offset the intense use of other fields.

Morris said without the $900,000 in funding, he is concerned the project may be unattainable. “This track really needs to be replaced as soon as possible,” Morris said.

The vote came after continued appeals from families and students for the project to proceed.

High school senior Jaeden Case, a member of the girls soccer team, said many young athletes are being injured from the “never-ending holes and divots we are forced to play on.”

“Every home game we are humiliated to play on a field that is essentially unplayable,” Case said.

Kristin Worgess, a member of the Hurricane Boosters and parent of three athletes, said the overhaul of the high school playing field is part of an effort for the community to take more pride in athletics, which has included renovations to the trophy case and athletics hallway at the school, and which could help discourage privileged families from pulling their children out for private schools.

Fellow Boosters member Stephanie Hockman of Pelham said low PFAS options are available for the turf. If the project doesn’t happen, four new grass fields would be needed instead to meet the district’s needs, and those pose more dangers to the environment from mowing and fertilizer use, she said.

The debate over artificial turf is not happening at private colleges or private schools, where some of those concerned about the project are sending their children, said Mary Klaes, a member of the Boosters.

“This debate is an opinion debate,” Klaes said about the turf controversy. “There is nothing settled.”

Klaes said she worries that vulnerable students are at risk of dropping out if they can’t participate in athletics.

Meanwhile, Demling made a motion to confirm a committee policy that, once a vote has taken place, members actively support that vote. He said he was not proposing censoring or reprimanding Shiao, just emphasizing the policy for a “new” member.

Demling said he was worried that Shiao’s presentation to the Town Council on Nov. 21, and writing on her personal blog in which she outlined PFAS concerns, constituted active opposition to implementing a school board decision. “That’s where I feel like a line is crossed for a committee member,” Demling said.

Shiao, though, said she didn’t knowingly violate a policy in speaking to councilors, and that Demling’s action was “very personal.”

“There may be those who don’t like what I had to say and are unhappy I said what I did,” Shiao said. “I will not be bullied into silence. I also don’t need to be patronized as a new School Committee member.”

Stancer said she was puzzled by the need to have a vote on the committee’s policies.

Before the vote, Chairman Ben Herringon, who abstained, said he didn’t have a problem with Demling’s motion. “We should all be reminded of the policies as often as possible,” Herrington said.

But he also issued a caution to his colleagues.

“We had all better learn how to listen to each other if we want to show our children, our students, our future leaders, what responsible and civil discourse looks like,” Herrington said. “We need to be brave enough to continue this conversation, not as adversaries, but as a community that has our student’s best interests in mind first and foremost, and not as the owners of immobile, unmovable perspectives.

“Humanity should always outweigh our individual needs to be right,” Herrington said.

During public comment, several residents, both in written and oral form, supported Shiao.

“Elected officials, I urge you to set an example for the youth in our district and show support for appropriate expression for freedom of speech as Jennifer chose to exercise,” said Joanna Morse.

“What she is doing is practicing her right to reconsider her vote based on new information,” said Demetria Shabazz.

Former School Committee member Kathleen Traphagen said that the committee should always put students and schoolchildren at the center of conversations.

“Taking the time to discuss this is not centering the kids at all,” Traphagen said.

Scott Merzbach can be reached at smerzbach@gazettenet.com.