Phase I of the San Pedro Creek Culture Park is finally complete. The re-imagination of what had been a concrete ditch for decades is filled with landscaping, walkways, stone walls, public art and water features.

The block between Houston and Commerce streets near the Spanish Governor’s Palace was overflowing with humanity Friday evening for the several hundred gathered to see their tax dollars at work.

The big attraction was a 250-foot colorfully lit waterfall. When officials turned it on, the crowd roared.

The waterfall, named “Stream,” is a public artwork by New York artist Adam Brown. The waterfall lights change colors once synched to music or voices from a 1940s style microphone at its base.

“People should come and experience it. I’m surprised by how few people have experienced it,” said poet and artist John Phillip Santos. “I think this enhanced track now will maybe invite still more folks down.”

“Art installations, a lot of nice water features, seems like it’s built to last. high-quality It’s not going to fall apart in a few years,” Castillo said. “So it seems like a solid effort. I do appreciate you putting money into infrastructure projects like this.”

The phase completed runs from Houston Street to Cesar Chavez.

“I think this is going to be bigger than most San Antonians ever understood as it was coming together. It will rival some parts of the River Walk, and it should,” said former San Antonio Mayor Henry Cisneros. “It basically takes the River Walk to the west side of downtown, an area that’s been overlooked, generally. It makes water the whole thread that holds the city together in a wonderful way.”

Nearby art also includes a five-panel mural that tells the county’s 300-year history. The foundations of an old African Methodist Episcopal Church, soap works, and brewery can also be seen. There is also an outdoor public performance area.

The entire San Pedro Creek Culture Park, when completed, will run 2.2-miles along the creek through west downtown. The total project is currently valued at $290 million. It is funded by the county and managed by the San Antonio River Authority.

He also said the creek project has helped restore the ecosystem, improved flood control, cleaned the water, and has seen the return of native trees and plants. 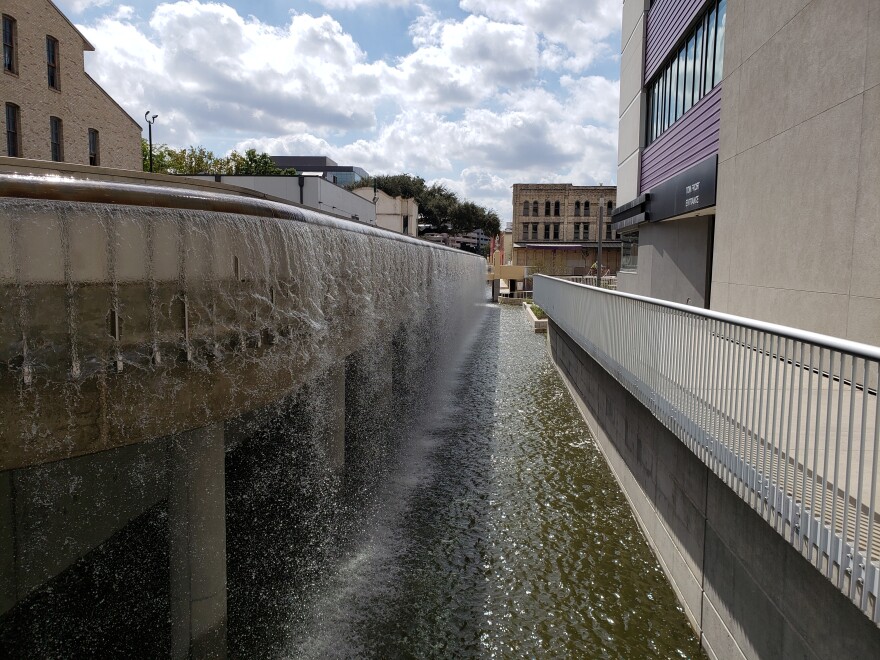 “Stream” as it appears during the day. Downtown visitors can stroll creek side or find a place to sit to eat lunch. TPR HQ sits to the right.

The TPR building is adjacent to the 73-year-old Alameda Theatre, once one of the largest Spanish language movie theaters in the country for decades before it closed in the 1980s.

“This particular area in my memory was where my grandmother on my mother’s side would take me to the movies at the Alameda,” said former San Antonian BK Munguia. “And this is where many Mexican-American families shopped.”

Residents are looking forward to future phases of the San Pedro Creek redevelopment project, that include renovation plans for the Alameda and the entire area surrounding the creek.