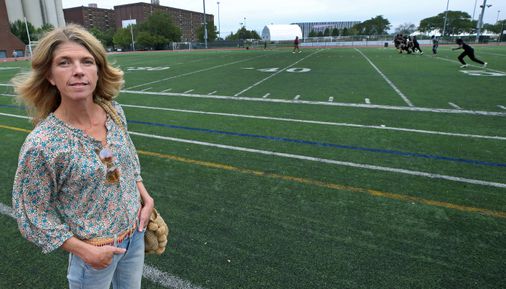 “What I really want is for the kids to be safe,” said Johanna Hynes, whose three children played lacrosse at Charlestown High School’s aging multi-purpose field, used for football, lacrosse, and soccer.

It’s just one of scores of aging artificial turf fields in Boston and across the state and country that have not been regularly monitored and tested, despite warnings from experts.

Tests from 2019 through April of this year reveal that sections of the Charlestown field exceeded the threshold for safety established by the American Society for Testing and Materials, an international company that develops the standards.

Records as far back as September 2019 show the testing company warned the city the field needed to be fixed or replaced as soon as possible, noting the severely diminished shock absorption “qualifies as unsafe and for the expectation that life-threatening head injuries may occur. ”

Hynes started researching the turf earlier this year because she wanted to learn more about potential environmental problems. She pressed city leaders for records and received documents that revealed the failed shock absorption tests. Hynes was floored.

“Is it safe for kids if they fall?” she wondered

The Charlestown field, the city’s oldest artificial turf field, was installed in 2007 and is seven years past its warranty.

After Hynes started raising questions about the field, the city paid to fix the lack of cushioning in five spots that had failed the testing. City records from tests in May showed the field passed, but the testing company noted the field was in “poor condition.”

Unimpressed by the city’s response, Hynes and other parents chipped in $1,500 and hired an independent company in July to retest the field. That test indicated the field again failed shock absorption standards.

The city sent its contractor out to again address the problem sites, and Boston Parks and Recreation Department Commissioner Ryan Woods told the Globe his department plans to renovate the entire field, with work beginning in November. The Charlestown project is still out for bid, so the final cost is to be determined. But experts said such renovations cost anywhere from $720,000 to $1 million. In the interim, he said, the city will monitor it regularly and spot-fix hard spots.

But what about the city’s other artificial turf fields? Their shock absorption levels — and the safety of thousands of others across the state and country — are an open question. Boston’s Parks and Recreation Department maintains 22 artificial turf fields, 9 of which were installed on or before 2013. The city had no maintenance contracts for the facilities until 2018. A department spokesperson said all fields now receive six maintenance visits a year that include grooming and fluffing up the cushioning infill, but they are not routinely tested to verify sufficient shock absorption.

“If I had any results that were failing, if there’s anywhere an issue where somebody could be put in harm, I want that rectified right away,” Woods said.

The Massachusetts Interscholastic Athletic Association, which governs interscholastic play on fields across the state has “no regulations or requirements for any fields or playing surfaces,” according to the association. Nor does the National Federation of State High School Associations, which writes the rules for most US high school sports and activities. A spokesman for the federation told the Globe, “the testing of any playing surface is left to the local levels.”

There are roughly 16,000 synthetic turf fields in North America and an estimated 1,200 to 1,500 fields are installed each year, according to the Synthetic Turf Council, an industry trade association.

The independent standards set by the American Society for Testing and Materials say g-max readings shall not exceed 200 at each test point on the field. The Synthetic Turf Council says proper turf maintenance should keep fields below this level for the life of the field.

But the council suggests for safety reasons, g-max levels for artificial fields should remain below 165.

Boston city records show the vast majority of locations tested on the Charlestown High School multi-purpose field since 2019 exceeded 165, and roughly half tested near or over 200.

By comparison, shock absorption on natural grass fields is about 80 g-max, industry experts say. Grass fields severely compacted from use and drought may test as high as 115 or 120, they said.

As synthetic turf ages, the cushioning, known as infill and typically made of sand and rubber pellets, becomes more compact and also migrates out of the field, depleting its shock absorption ability, said Jeffrey Gentile, operations director of Firefly Sports Testing, a New Hampshire company that tests fields nationwide.

A 2015 review of head injuries and synthetic turf by the Concussion Legacy Foundation concluded: ”despite one in five high school sports concussions being caused by surface impacts, and one in four concussions in youth soccer and football, we have no national conversation on the technology underneath on athlete’s feet.”

While numerous studies have examined the link between artificial turf and the risk of ankle, knee, and hip injuries, the research on head injuries from artificial turf remains limited.

Woods, the city’s parks commissioner, said community groups often lobby for artificial fields because they can endure more wear and tear. They can be used right after a rain storm, unlike natural grass, which often needs a day to dry to avoid damage. He said climate change, which is expected to bring more cycles of rain and drought, is likely to increase the popularity of artificial turf, which does not need to be watered, fertilized, or mowed.

“In a densely populated city, such as Boston, we’re so limited with the amount of open spaces we have, especially with recreation facilities, such as large fields,” Woods said. “We often have waiting lists.”

Boston Mayor Michelle Wu, who was elected on a platform of environmental justice and green initiatives, has “a preference for grass playing surfaces wherever possible,” her office said in a statement. The mayor has not, however, issued any directives on the use of artificial turf in Boston.

Some field testing experts say they have tried to convince major sports governing authorities, such as the National Federation of State High School Associations, to adopt required standards for shock absorption on artificial turf fields, similar to rules used in Europe.

“Unfortunately in the US,” said Kieran O’Donnell, a general manager for Sports Labs, an international testing company, “it’s a race to the bottom in quality.”

Is it Time for Artificial Grass?