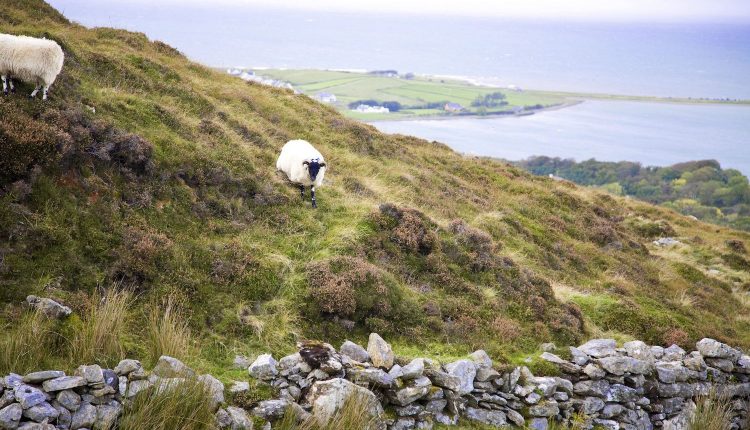 Cormac MacConnell explores the history, artistry and skill behind Ireland’s iconic stone walls and recalls his memories of some of the more wonderful examples throughout his life.

There is a young, lean man with a centuries-old face building a stone wall in front of a new house these days near Carrygerry Chapel. I pass him almost every day and admire the work.

There is something quite exquisite and even exciting about stone walls and the men that build them. I’ve always thought that.

These craftsmen are working with gray chunks and flags of eternity building boundaries that will be still young when they are dead and gone. Stone walls last forever. And men don’t.

The new generation of Irish stone walls is different from the walls I grew up and spent my adult lifetime among in Connemara and Roscommon. These are the stone walls of the “New Ireland”.

The cut stones arrive on site in stout construction bags, the sand and gravel and cement likewise. It is a neat modern job from start to finish, and the new generation of stone workers work with quite amazing speed.

Most of their walls are of the ornamental type with battlement style tops. They are straight as a die where they need to be, sweetly curved towards stone gateposts invariably fitted with black iron gates. They perfectly match the relatively huge new houses behind them.

A neighbor, looking at one of these new houses recently, said dryly, “When I was a child we had small houses with no bathrooms and big families within. Nowadays we have big houses with far more bathrooms than children.” I’d say he hit the nail on the head.

You can’t see through the new stone walls. The stones involved are near enough of uniform size. There’s a lot of fancy plastering work holding them together.

They are not at all like their ancestors marching up and down the mountains along the west coast in the Burren and Connemara and Kerry and Cork. You can readily see through these old “dry” ones where no plaster was used at all, just the powerful sleight of the hands of mountainy men who intuitively knew which one would fit as comfortably against its neighbor as an ass fits into a cart.

And then they used the stones that were lying around the mountains irrespective of their shape or size. They were clearing the little fields at the same time as they were building their boundaries.

And it was not just areas that had their own styles of building them. The individuality of men that are long dust is still indelibly etched forever across their home places.

Near Oughterard, a farmer pointed me out a wall that had been built by his great grandfather. It was far taller than any others around the landscape, and the sun shone through it in a regular pattern that was certainly not haphazard; it had been designed into the structure for sure. I could recognize that man’s work to this day. 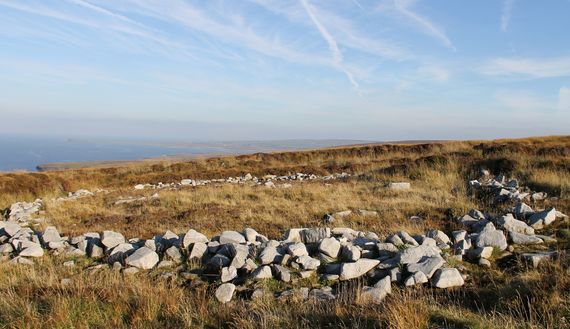 Here in Clare the Moher and Doolin flagstones, and similar flagstones from adjoining regions, create totally different walls, the flags apparently growing out of the earth rather than lying atop it, their edges supporting each other snugly and strongly, like the planks of a clinker -built boat.

And they were used too for the rooves of many of the old sheds and the tumbledown cottages that long ago crumbled under their weight. But the walls march on and on.

I believe there is a considerable body of scholarly work available re the subject, but I’ve never studied it. I prefer to just look at what I see with awe and pleasure. Sometimes too much knowledge erodes the wonder of things.

There is a roadside stone wall on the side of a hill on the twisting road up to the Cliffs of Moher as one approaches from the Lisdoonvarna direction. The builders of the wall incorporated existing outcrops and buttresses into it in a cunning way as they worked.

There is one spot, high against the sky, where such an outcrop has the shape of a Madonna, but you only notice the resemblance in the late spring and summer because it is then that a natural bouquet of bright wildflowers form the babe at her breast . Then you can scarcely pass by – at least I can’t. Look out for it if you pass that way in these fleeting days of summer.

There is a quite remarkable stone chapel on St MacDara’s Island off the Galway coast near Carna. It featured for many years on one of our postage stamps because it was of the very early Christian and Celtic type which disappeared afterwards. It needed restoration about 25 years ago and I went out to cover the work.

The department in charge of our ancient monuments at that time was called the Office of Public Works, and they had a permanent team of skilled traditional stone masons of the highest caliber whom I met on the island.

Their task was to rebuild the totally stone roof of the little chapel, a roof with a defiantly sharp pitch to it, sharp as the Almighty’s lifted forefinger. They were all members of an extended family from South Roscommon, from around the Moore area. 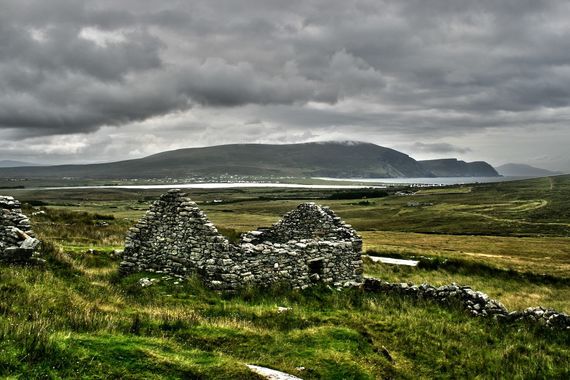 They were all quietly proud of their skill, and when they looked at their refurbished chapel they all wore the same faces as the young man now working down the road with his heavy chunks of eternity that will almost certainly outlast the dwelling before which the wall is being built.

When I was in my teens I once met a pretty girl by contrived accident in Donegal and was in love for 48 hours. She was studying architecture in Glasgow and was fascinating on the subject of the techniques used both in the Highlands of Scotland and in Ireland for building with stone.

She told me about a mixture of lime and bullocks’ blood that the stone men who built the huge castles used as mortar and about the way they “read” the grain of the stones so they could cut them exactly to size with sharp quick hammer blows struck at exactly the right point with the right force.

We were out beside Mullaghmore, and we strolled by a beachside stone wall, all bleached by the winds, and saw a pair of flickering stoats hunting through it. And we exchanged a kiss or two leaning against that wall wearing its summer waistcoat of green glossy ivy and flashes of aromatic wild woodbine.

Now I am silvered by the years, and I heard through her Donegal relative years ago that she died in a road accident in Malaya about seven or eight years after we met. But that old wall is surely still there.

The sun warms its back. The winds and the seas washing and scrubbing its eternal face. I must go back there sometime soon just to check it out.