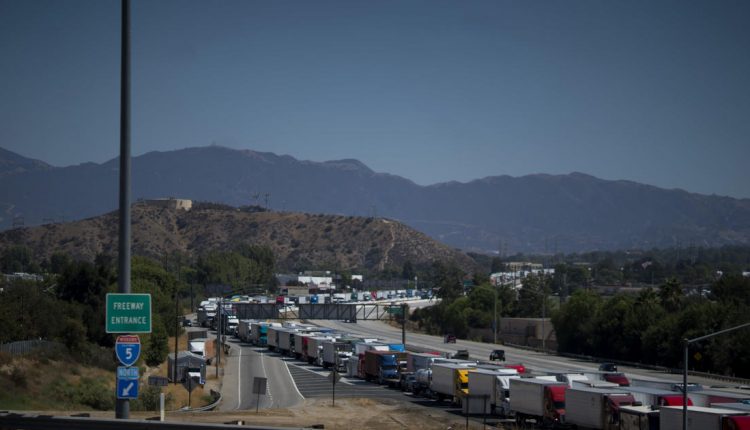 Some travelers hitting the road for Labor Day Weekend were hit with unexpected traffic delays in Castaic on Saturday, after Caltrans officials decided to close two lanes of the 5 Freeway due to damage caused by the Route Fire.

The fire, which burned more than 5,200 acres in Castaic beginning Wednesday afternoon, jumped the freeway at one point and crews working at the scene determined that some burn damage sustained by the retaining walls could threaten its structural integrity.

🚧 🚗 NB I-5 two right lanes closed near #RouteFire #Castaic. retaining walls burned; structural engineers must inspect wall integrity before any load is put on lanes. Queue is 11 mi and delay is 90 mins. PLEASE use #US101 or #SR14 instead of I-5. pic.twitter.com/bFGtgtx9aT

Those living in the area, which has seen heavy traffic all week due to the fire, have seen their day-to-day routines suffer through even more extensive gridlock as a result, with so many people heading to their respective destinations for the long weekend .

“Everybody’s coming in from everywhere,” said Elanit Cleary, who lives in Castaic. “The traffic is so backed up we can’t go to the grocery store. We can’t go to Target. We can’t go anywhere … it’s just crazy, it’s complete chaos.”

The queue of drivers along the northbound lanes, over 11 miles long, added up to a more than 90 minute delay for many heading through Castaic on Saturday, bringing noticeable frustration to many.

“You have thousands of vehicles exiting, there’s only two exits here and they are only one way streets. They are not four-lane highways,” said Arnold Kraft, who plans to speak at the next city council meeting to vent his concerns and express some suggestions to ease congestion in the area.

His main concern is if his hometown catches fire again, located in a region more susceptible to wildfires, since he and his family sat in hour-long traffic earlier this week when they were forced to evacuate from their home.

“If the weather conditions were right, when we had the Sylmar fire years ago, with Santa Ana winds blowing 35 to 45 miles an hour, it would have been a totally different story,” he said. “People’s lives would have been lost.”

Caltrans officials noted that the closure was expected to last through Labor Day Weekend, and urged drivers to use State Route 14 or US Route 101 instead of the 5 Freeway. All Southbound lanes were open to traffic.

The CBS LA Staff is a group of experienced journalists who bring you the content on CBSLA.com.