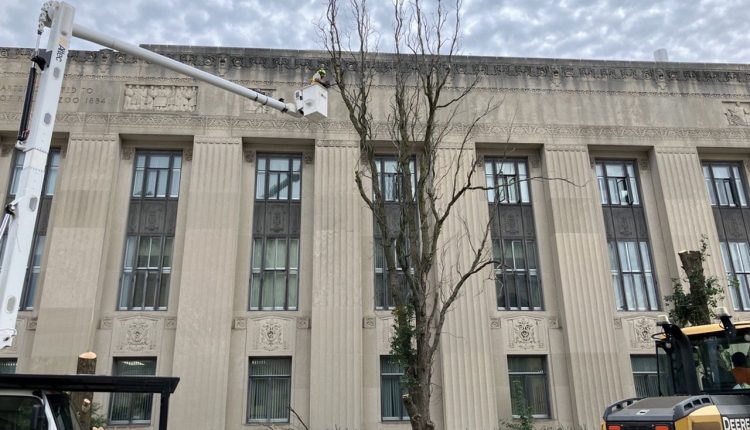 KALAMAZOO, MI — Three trees that were planted several decades ago next to Kalamazoo City Hall were removed this week after officials noticed a decline in their health over a few years, Deputy City Manager Jeff Chamberlain told MLive/Kalamazoo Gazette.

“City staff noticed a marked decline in the health of the trees a couple of years ago and were monitoring them,” Chamberlain said. The trees are columnar oaks, he said, and they believe they were planted in the 1940s or 50s.

Unfortunately, they continued to decline in health, Chamberlain said, and the city forester determined they needed to be removed.

Officials are working on a new landscape plan for the west side of City Hall that will incorporate new landscaping complementary to the historic features of City Hall, Bronson Park and the other important buildings in the area. This is anticipated to be a 2023 project, Chamberlain said.

Public Services Director James Baker said there were leaves on the ground from the trees, and their removal was necessary.

“Any reasonable person could see they were dead,” Baker said.

The trees were classified as hazardous because they were dead, and in a removal like this one, crews work to take the trees down as quickly and safely as possible, Baker said.

The tree removals revealed the west side of Kalamazoo City Hall, which had been partially blocked from view for decades.

Meanwhile, the city also has a goal to add trees to the landscape overall. The city’s tree program is planting 300 trees annually, Baker said.

The city of Kalamazoo removed three trees from city hall on Tuesday, Sept. 20.

First of 3 harassment complaints against Kalamazoo police chief made in July, emails show